The World Health Organization and Truth 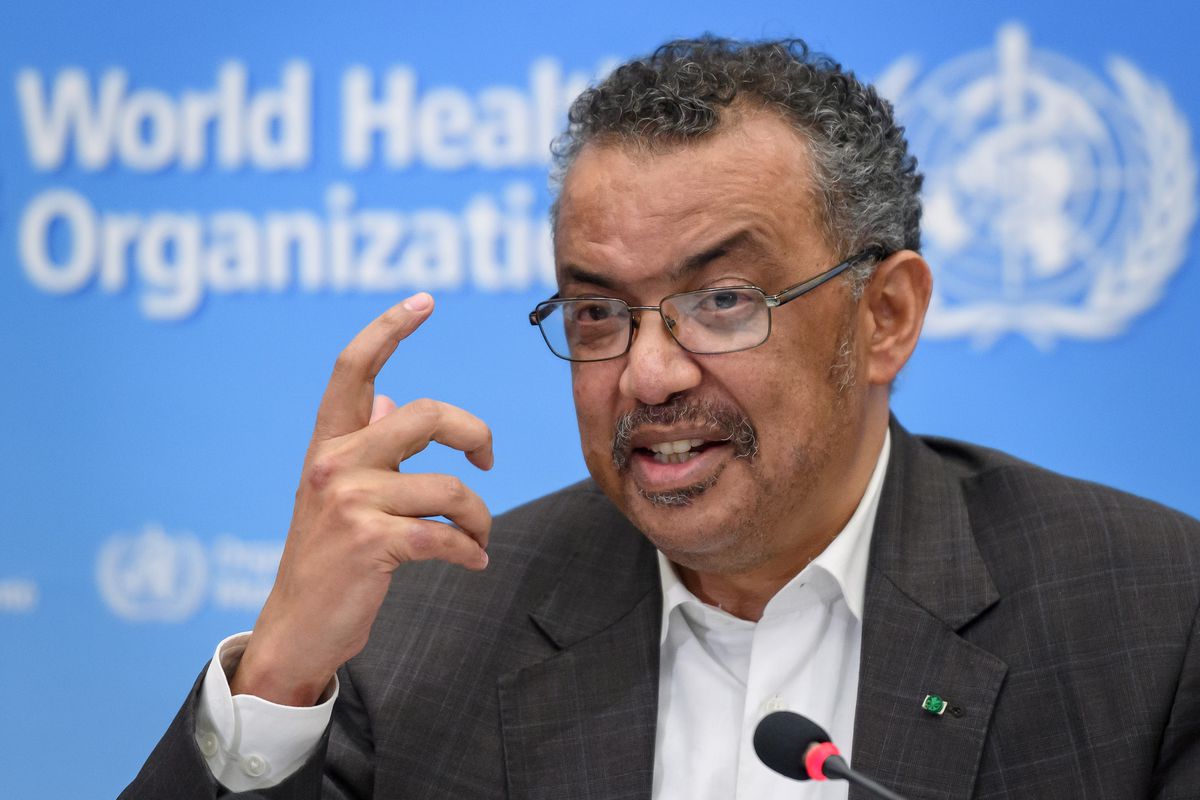 Time’s glory is to command contending leaders and points of view, to unmask falsehood and bring truth to light.

Until recently, the Illnesses of leaders were kept secret. In 1918 British Prime Minister David Lloyd George, then aged 55 was infected by the Spanish flu, was hospitalized and put on a ventilator to aid his breathing for a week. He almost died, but his severe illness was kept secret from the public in the belief that the truth would be bad for the morale of the country.

The second case is of Prime Minister Winston Churchill who in July 1953 suffered a stroke that left him paralyzed down his left side, and his illness was not publicly revealed. The event was covered up by a conspiracy of silence led by the three major press Lords who agreed to organize the gagging of the whole of the British press. The conspiracy was more compelling because the silence also applied to Churchill’s deputy, foreign minister Anthony Eden who was gravely ill at the same time and had to undergo major surgery for a damaged bile duct.

Today, information about the present pandemic Covid-19 is flowing and immediate. The severe illness of the 55 year old Prime Minister Boris Johnson in March 2020 was made known immediately with the details of his oxygen treatment, admission to intensive care in a central London hospital, and recovery without use of a ventilator.

Yet, the inaccurate or confusing information, and lack of sufficient data  of the information about the pandemic  has become subjected to political controversy. It can be accepted that political leaders and scientists in all countries were slow to sound the alarm of danger of the rapidly spreading pandemic, and that governments were ill prepared and were slow and uncertain on how to deal with it. Their hesitation is understandable for two reasons: the complexity of the problem; and the difficulty of judgement where there is uncertainty. Relevant to the second factor, the Israeli psychologists Daniel Kahneman and Amos Tversky have pointed out that choices are swayed by a host of factors that do, though they should not, affect decision making, that mistakes in human judgment are not exceptional but the rule, that people make choices under conditions of uncertainty.

The complexity of the pandemic is apparent. There is still speculation about the origin of the virus. Moreover, the unknown virus mutated into different, at least three, strains, and spread globally. It seems as if the virus first entered humans from ant-eater animals called pangolins after starting in bats. One strain, the original, type A , started in China, but did not last long, and was communicated to Japan, Australia, and the U.S. A second, type B, became dominant in China before spreading to Europe and Canada. A third, type C, became dominant in Singapore, Italy, and Hong Kong.

The problem of how to respond to the virus is therefore difficult. Covid-19 is clever and elusive, and increased rapidly. It took 67 days from the first reported case to reach 100,000 cases; it took 11 days to reach the second 100,000. Then it took only four days to reach the third 100,000. A second factor is the problem of testing, either molecular tests, or blood or serological, and even saliva testing devised at Rutgers University. Molecular tests apparently have a higher level of reliability than serological tests.

It is saddening that in a world where the number of confirmed Covid-19 cases has reached two million, and where the number of deaths in some countries has far exceeded preliminary estimates, information about the pandemic has not been completely accurate or neutral. The initial problem was that China continued to falsify or cover up important information about Covid-19.  It hid the existence and the dangers of the virus from the world, and vastly underreported the casualties in its country. The damage was compounded by the fact that thousands of Chinese travelled around the globe, thus affecting other countries.

The evidence is clear. Two Chinese scientists were criticized for telling the truth. Li Wenliang, 33 year old ophthalmologist, was a whistleblower who sounded the alarm in December 2019 that infections in Wuhan were similar to previous SARS outbreaks. He was condemned as a criminal for spreading “false rumors.” He died from the virus on February 7, 2029 and was hypocritically declared a “martyr” by the Communist Party. A second was Chinese virologist Shi Zhengli, known as Bat Woman for her work on bat viruses, found on January 14, 2020 that the virus could go from animals to people. It took China six days before this finding was revealed.

For the U.S. this was distressing because of past scientific links with China. The U.S. National Institutes of Health had awarded a $3. 7 million research grant to the Wuhan Institute of Virology which was experimenting on bats as the original source of viruses and on transmission. Many of the research faculty of WIV were trained at a lab in Galveston, Texas.

It is understood that all countries including the U.S. were unprepared to anticipate and deal with the virus. The EU was totally unprepared, and showed its lack of solidarity in dealing with the severe outbreaks in Italy. President Emmanuel Macron, instead of enforcing a strong form of social distance, attended an agricultural fair in Port de Versailles on February 22, 2020.

No full assessment of WHO is possible at this moment. But it is clear that it made mistakes, and was not neutral. For a time it refused to state clearly that Covid-19 virus originated in China, and delayed reporting that the virus transmitted to humans. Indeed, it even said it had not been proved.

The World Health Organization, WHO, created in April 1948  as a body to treat health as a human right, has 194 members, though because of Chinese pressure it excludes Taiwan. In 2019 the U.S. contributed $400 million to its funds, while China gave $44 million. Working closely with governments the WHO has played a role in the eradication of polio, and in the 1970s helped cooperation between the U.S. and the Soviet Union on eradication of smallpox. Its Director-General, Tedros Adhanom Ghebreyesus, is an Ethiopian microbiologist and malaria researcher. Previously Ethiopian minister of health and foreign minister, he was appointed as head of WHO in 2017, the first non-physician and the first African to be appointed.

Tedros never practiced as a doctor but was in charge of Ethiopia’s health care system when the country was covering up its cholera epidemic in Ethiopia and Sudan, in 2006, 2009, 2011, in order not to embarrass the two regimes. He has accused Taiwan, which had been critical of his lack of action, of leading personal attacks on him, and responsibility for racist comments and death threats.

Tedros and the WHO is now the center of controversy and criticism, particularly by President Donald Trump, concerning its alleged lack of objectivity and delay in dealing with Covid-19. This delay influenced the reluctance of European countries from taking strong measures. Trump has threatened to suspend its payments to the WHO for several months. He argued that the WHO is too “China-centric.” Tedros replied that politicizing the rapid spread of the virus would led to more deaths, “if you don’t want many more body bags, then refrain from politicizing it.”

Tedros has lacked objectivity. He praised China for its “transparency,” and praised, on January 14, 2020 the way China had responded to the crisis. He accepted the inaccurate figure casualties reported by China, and believed the Chinese assertion that there had been no human to human transmission of the virus.

Not until January 30, 2020 did WHO acknowledge that the virus posed an international threat. Yet on the same day it did not approve of U.S. restrictions on travel to and from China. WHO explained its position by saying that to call for travel bans was inconsistent with international law. And not until March 11 did WHO declare the virus was a pandemic, spreading worldwide.

While President Trump has a point in his criticism, it is arguable whether withdrawing from the WHO at this moment is desirable. All the same it is not helpful that the UN Secretary-General Antonio Guterres on April 14 defended WHO saying it was absolutely critical to the world’s efforts to win the war against Covid-19. However, those efforts depend on accurate information. He would have been more helpful by indicating that the WHO, like China, had not provided accurate and independent information that would have aided countries, but had spread misinformation about the fight against Covid-19.

The WHO did not provide accurate and independent information that might have helped countries. On the contrary, it spread disinformation that allowed the virus more to infect the world. It is time for the WHO, and the UN, to recognize that Covid-19 is a global issue, and that political agendas and international differences are secondary.