Today: Letter before Action to be delivered to Home Secretary. Implement the deportation of the Rochdale rapists.

Press release received last night from Hearts of Oak (a free speech organisation set up earlier this year) and Women Against Groomers (Rochdale branch – the name says it all).

Pre-action Letter to be served at 12 midday tomorrow, 22nd May,
at the Home Office, 2 Marsham Street, Westminster

Three convicted members of the notorious Rochdale grooming gang, Abdul Rauf, Abdul Aziz and Adil Khan are still walking the street of Rochdale nearly two years after they were stripped of their British citizenship prior to deportation back to Pakistan.

They are causing distress and anger with both victims and residents in the town and across the country.

At 12 midday tomorrow Hearts of Oak together with its Rochdale partner Women Against Groomers will deliver a pre-action Letter to the Home Secretary Priti Patel at her office in Whitehall. In this they give notice that they are starting legal action to force her to deport these child rapists.

Alan Craig of Hearts of Oak will say:
“There has been a complete failure of duty by the Home Office, and an abject betrayal of the victims and residents. This also sends a clear message to the wider public that the Home Office is not prepared to do its duty and rid the country of these and similar monsters.

“We had hoped for better from you, Ms Patel. You have said rightly that the child victims ‘have been let down by the state’. Yet you do not remove these paedophiles and thereby you perpetrate the injustice against them.”

Liz Thirsk of Rochdale-based Women Against Groomers said:
“Rochdale residents are very unhappy with the total lack of action regarding the removal of the three men.” 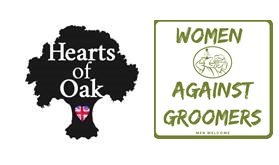 Because of lockdown I can’t be in Westminster to observe this and report but I wish them every sucess. The presence of groomers, both convicted and known is a source of such concern in Rochdale that it was even mentioned to me in casual conversation about the town when I visited in the spring to see the Dippy the Dinosaur exhibition in the library and town museum. That men whose part in this crime was so heinous that they have been stripped of citizenship and commanded to be deported back to Pakistan are still at liberty in the area is a disgrace.

I have a great deal of respect for Alan Craig who will represent Hearts of Oak, and Liz Thirsk a former Rochdale councillor sounds a decent woman. Good luck to them.