The death of brave officer Lt Col Arnaud Beltrame overnight brings the death toll in the jihad at Carcassonne and Trebes to four. The jihadist  Redouane Lakdim is also dead. The Paris correspondent of The Irish Times has news of further arrests this morning, and a summary of events.

The dead gunman was identified as Redouane Lakdim, aged 25. “A woman close to him, who shared his life” was arrested on Friday night, Paris prosecutor Francois Molins told a press conference in Carcassonne.

“Today’s events are an unfortunate and tragic reminder that the level of the terrorist threat on our territory has not diminished,” Mr Molins said. “The threat has become endogenous. It comes mainly from radicalised individuals who are on our national territory.”

Lakdim fired on a white Opel Corsa in the Aigle housing project in Carcassonne at 10.13am, killing a passenger and wounding the driver. He drove 1.5km to the east, where he fired six more bullets at four CRS riot policemen from a unit based in Marseilles. They were returning from a jog into Carcassonne and were unarmed. One of the policemen suffered a punctured lung and two broken ribs.

The gunman continued 6.5km farther east to the small town of Trèbes, with a population of 5,000. He entered a Super U supermarket “shouting Allahu Akbar and saying that he was a soldier of Islamic State, ready to die for Syria”, Mr Molins said. Islamic State is also known as Isis. “He demanded the liberation of his brothers before shooting a client and an employee of the store, both of whom died on the spot.”

Media reports said Lakdim specifically asked for the liberation of Salah Abdeslam, the only survivor of the 10-member Islamic State unit that killed 130 people in Paris on November 13th, 2016. Abdeslam is awaiting trial in France.

There were about 50 people in the supermarket when Lakdim burst in. Several were taken hostage. A gendarmerie officer, Lt Col Arnaud Beltrame, negotiated the release of the hostages by volunteering to take their place. “When we heard shooting the GIGN intervened,” interior minister Gérard Collomb said.  Lt Col Beltrame was hit by three bullets . . . Two other gendarmes from the GIGN were wounded during the assault.

“The man who carried out the attack in Trèbes in the south of France is a soldier of the Islamic State, who acted in response to our appeal to strike the members of the international [anti-Isis] coalition,” the statement said.

Lakdim was reportedly “very active on Salafist websites” and trained for jihad during several trips abroad. It is not yet known if he was in contact with members of Islamic State, or acted of his own initiative. Mr Collomb said Lakdim acted alone and called him a “petty drug dealer”.

Mr Molins said Lakdim was put on the “S” (for “security”) watchlist in 2014 “because of his links with Salafist movements”. He received a one-month suspended prison sentence for possession of illegal weapons in 2011. In 2016, he served one month in prison in Carcassonne for drug dealing. 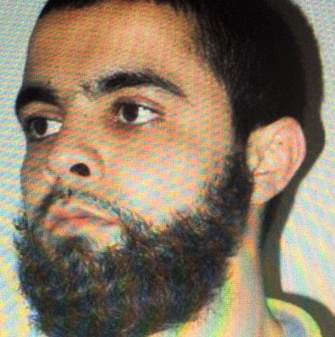 Lakdim was kept under surveillance by French intelligence services in 2016 and 2017. “There were no precursor signs that he would proceed to terrorist acts,” Mr Molins said.

The neighbours made the obligatory commendation of one of their own Lakdim was described by a neighbour as a “pleasant young man” who lived with his parents and sisters in a flat in Carcassonne, taking the youngest children to school every day. Don’t just arrest his woman – take and interrogate his parents, those siblings out of childhood, his numerous ‘cousins’ and FIND OUT WHAT THEY KNOW.

The extreme right-wing Rassemblement National issued a statement titled “When will the government realise that we are at war?” The attack was carried out by “a foreigner on the ‘S’ list who was also a delinquent,” the party noted. “What was he doing on French territory?”