Trump Has Strengthened, Not Undermined, Democracy in the U.S.

He has set about rescuing a system that had broken down. 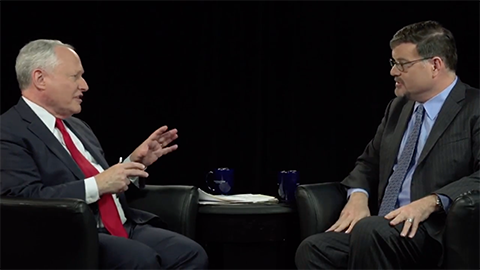 It is distasteful to return to my exchange with my esteemed NRO colleague Jonah Goldberg about the column he wrote several weeks ago likening President Trump’s reference to the implantation of FBI informers in his campaign as “Spygate” to McCarthyism. He replied on June 6, citing some of what I had written, and putting me in the category of those who had criticized his column because he “should have endorsed ‘Spygate’ in toto.” I neither wrote nor implied anything of the kind. My objection was that any likening of Donald Trump to Joseph R. McCarthy is utterly spurious and Jonah knows that perfectly well. I won’t dwell further on the point and welcome his emphatic assurance that the comparison was as circumscribed as he defined it in his June 6 revision. It was still nonsense but much less objectionable nonsense and Jonah Goldberg has a right to an unvexed retreat, like Kutuzov after Borodino or Lee after Gettysburg (contrary to Lincoln’s orders).

The reason I raise this is that Jonah’s recent book The Suicide of the West, something of a sequel to the famous book of the same name by James Burnham, (a founding editor of National Review), decries Trumpian nationalism and the president’s methods of rousing mass opinion against the governing elites as indicative of the destruction, self-destruction in fact, of a society born of democratic enlightenment. If the author advises that I misread his book (as he alleges I did his McCarthy piece), then I will defer to him, of course. But that is how I read it, and this really is our issue; we all take polemical liberties sometimes and the reference to McCarthy was really not important. But I think the victory of Trump and his gradual success in the principal areas he has focused on — economic growth, deregulation, tax reduction and reform, regularization of immigration, nuclear non-proliferation, equitable burden-sharing in the Western alliance, reduction of the trade deficit and oil imports, and withdrawal from ecological measures based on fear of global warming — are strong evidence of the strength of enlightened democracy in the United States.

I will concede that the rescue process under this administration is inelegantly conducted at times, but rarely in recent American history has substance been so overwhelmingly more important than style. I believe that Jonah Goldberg and others who might be expected to approve most of the policy initiatives and results of the Trump presidency are unduly preoccupied with mere appearances, optics, and atmospherics. When Trump has departed the White House, if he has sharply stimulated economic growth, drastically reduced poverty and illegal immigration and the trade deficit, reduced the crime rate, reconstructed the Western alliance or at least eliminated its addiction to collective fantasy, and kept nuclear weapons out of the hands of completely untrustworthy regimes, perceived stylistic infelicities will be irrelevant and quickly forgotten.

The system Trump attacked had largely broken down. Apart from the leftward shift of the Obama interregnum, which was generally frustrated by a Republican Congress, a Bush-Clinton tweedle-dee and tweedle-dum had passed executive authority back and forth between themselves and was cranked up to do it again with Jeb and Hillary until Donald Trump mounted the stage and interrupted the play. After the indiscriminate militarism of George W. Bush’s seeking to plant democracy on stony ground, and the feckless pacifism of Obama, American foreign policy was in shambles. The resigned acceptance of a perpetually colossal trade deficit was essentially the result of American toleration of being hosed by largely disreputable and uncompanionable OPEC countries, unfair-traders led by China, and the supposed necessity of carrying the Western European allies on America’s back. The Obama climate policy would have been an act of singular self-punishment for the benefit of largely corrupt and flaccid under-developed countries, rewarding them for their backwardness like welfare addicts. Hillary Clinton would have continued this, and the Bush-Romney-McCain Republicans would have been only marginally preferable in policy terms, though probably less grating personally than a Hillary Clinton regime. (Senator McCain is rightly indulged, given his distinguished service and tenuous medical condition; without those mitigations, his public conduct in the last two years would qualify him as a public nuisance.)

The country was in stasis after 20 years of chronic misgovernment: debt-ridden, economically flat-lined on a per capita basis, ineffectual in the world after a horrible economic debacle, the generation of chaos in the Middle East, and an immense humanitarian refugee crisis, all thanks chiefly to legislative and executive blunders in Washington by both parties.

Trump is arresting the slide to the mortal atomization of society. Donald Trump is proof of the vitality, even imperishability, of a democratic and free-enterprise system, not of its weakness and impending doom. The disgraceful and largely illegal promotion of the malicious scam of Trump-Russian collusion will enable the president to sweep out the stables with a bulldozer — if his defeated enemies had just given him a normal presidential honeymoon, he would not have bothered them. Now, as I have written before, their crimes will be punished.

In this sense of renovation, the Trump phenomenon bears some resemblance to the New Deal. Of course, aspects of the New Deal were too regimental and tax rates were raised excessively, because of Roosevelt’s concern about third-party demagogues such as Huey Long, Father Coughlin, and Francis Townsend. But the entire economic system had collapsed when Roosevelt was inaugurated, including the banks and stock and commodity exchanges. Twenty-five to 30 percent of the work-force was unemployed, and there was no direct federal relief for them. Roosevelt’s program earned about a solid 67 percent grade as policy (almost none of it was repealed by Eisenhower, Nixon, or Reagan). But it was a near-perfect score for catastrophe-avoidance. The failings of the recent welfare system can’t be laid on Roosevelt — he was for workfare and put the unemployed to work for the public good at bargain rates. Roosevelt would be horrified to see what he wrought transmogrified into taking money from those who earned it and giving it to those who haven’t, almost irrespective of merit, in exchange for their votes, even to the point of admitting millions of foreign peasants illegally and taking no great pains to prevent them from voting. It could not go on and it will not, but it would have under the Bush-Clinton-Obama triad, however unceasing the evasive bunk about “comprehensive immigration reform.”

The real danger will be, if it appears, not the decline of religious practice, which is much commented upon, but the growth of public indifference to the Judeo-Christian tradition of the sacred value of life, and an insufficient regard for a notion of a superhuman spiritual intelligence. Such regard must remain strong enough to dissuade people from imagining that they themselves are the gods. Alexander the Great and Julius and Augustus Caesar were complicit in their own proclamation as deities; they were very great leaders but not at all gods. Even President Trump’s greatest admirers are unlikely to accuse him of the fault of excessive modesty, but he respects that absolute core of our civilization. That cannot be said with confidence of some of his more vociferous critics. An agnostic doffing of the cap to religion as useful for public morale, as both James Burnham and Jonah Goldberg have made, is the real recipe for the suicide of our civilization that they commendably have sought to help avoid.