From Ugandan newspaper New Vision , AFP via All Africa News and the Nigerian newspaper Premium Times which sees parallels with Boko Haram

Security officials in Uganda say, police have shot dead two men ,arrested dozens and released about 100 women and children when a “radicalization centre” was discovered in a mosque in Kampala on Saturday. Police stumbled upon the centre on Friday as they pursued an individual suspected of kidnapping and murder this year, all the way to the Usafi Mosque in Kampala. 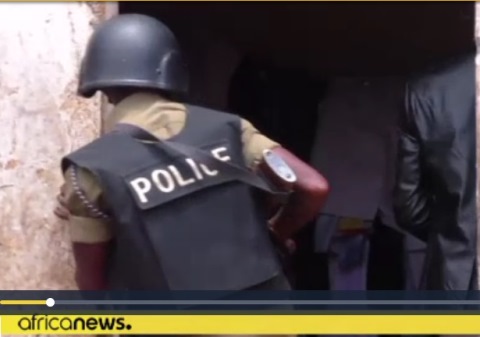 “Ugandan police force in a joint operation with sister security agencies conducted this operation at Usafi mosque in Kisenyi, Kampala, where 18 women and 94 children of various nationalities were all rescued unharmed. Two of the hostage takers were shot dead after violently and severely injuring one of the security officers”, said Ugandan police spokesman Emilian Kayima.

Speaking at a joint presser this morning at the Uganda Media Centre, the Minister of Internal Affairs, Gen. Jeje Odongo stated that a joint security operation was carried out last night over incidents of crime that have occurred especially in areas of greater Masaka and Kampala, focusing on trying to establish the motive behind these heinous crimes. The justification for last night’ raid was after credible intelligence on one of the key suspects in the murder of Susan Magara, of a woman from an influential Ugandan family, whose body was discovered on February 27, 2018, three weeks after her abduction and a series of ransom demands.

General Jeje Odong who was saddened by the fact that the scuffle had to take place in a Mosque, a place of worship explained that it was not the intension of security operatives to raid the mosque, but the situation at hand left them with no options. “When you see a criminal running to a mosque, do you give up on chasing after him, because he has run into a place of worship,” he wondered. In the scuffle, two people from the mosque were shot dead as they tried to retaliate at our security personnel,” said Jeje.

Speaking at the same presser, Police spokesperson Emilian Kayima stated that the 36 suspects, whose statements will be taken to help in the investigations, are under police custody.

The kidnapped children included Ugandans, as well as some Burundians and Rwandans, added Kayima.

Over the past year, Uganda has been gripped by a string of kidnappings and killings, mostly involving young women and children, in which captors demanded ransom but, in some cases, still execute their captives.

A statement from local police also noted that the mosque had been utilized to facilitate the kidnapping. “Security forces take exception to the fact that such a place of worship could be used under the cover of sanctity and freedom of worship to plan and execute crime,” police said.

PrevWoman who posted rap lyrics as tribute on Instagram guilty of Racism.
A Higher Loyalty: Truth, Lies and LeadershipNext