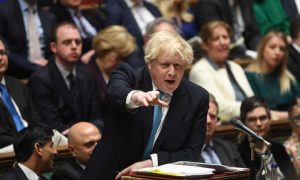 The British Government’s position on the Ukraine rests on two giant myths: the myth of national unity, and the Just War.  Neither can be sustained for long.  On the Just War, many support the Ukrainians in their struggle for independence.  Many more will say, the war may be just but it is not our war.  Why should we be dragged in to suit the policies of our leaders?  Yet Church, State, Parliament, the Media, all cry for Solidarity with Ukraine.  So does the House of Windsor, in an astonishing departure from its classic usage: the Prince of Wales gives vehement support to the Ukrainians.  I do not doubt that there is widespread sympathy for the immediate victims of the war.  But is this peace fever—fully analogous to war fever—backed as it is with the full force of national propaganda, a wise development?  How long will it receive popular support?

The war itself is beyond prediction.  A few points: ‘If you set out to take Vienna, take Vienna’ was Napoleon’s maxim.  Putin’s is ‘Take Kiev’.  He will, whatever the costs.  The media say triumphantly, the invasion is not going to plan.  No plan does.  The D-Day landings did not go according to plan.  They cite the Soviet defeat against Finland in the winter war of 1939.  The Russians came back a few months later with a larger army, better trained, and a smarter general; the Finns had to surrender soon.  It is not a good idea to bet against Russia in warfare.

Yet the Government’s war-cry is Solidarity with the Ukrainians.  I watched with astonishment today when the Speaker gave his full backing to the Ukraine resistance, for which there is no scrap of organized public support beyond letters to the press.  Our people have not been asked their views.  The Foreign Secretary, Liz Truss is happy to support British volunteers who go off to Ukraine to fight, a curious position for one who will have to defend the policy when the volunteers are returned from the fight in body bags.  In the past British soldiers were buried close to where they fell; today they come home to a public cortege.  At least the British Government tried to stay disengaged from the Spanish Civil War and its many combatants in the International Brigade.  A romantic addiction to the past is the curse of the Left, even more than the Right.

In today’s world, the anti-Russian cry takes great heart from the financial implications.  These are said to be deeply menacing to the regime.  I disagree.  The oligarchs resident in London—fine houses, easy access to Heath Row, sons and daughters in famous schools where they will form relations for life—will not be moved easily.  They will have the sympathetic support of British oligarchs, another form of class solidarity.  As for money, anyone who gets to be an oligarch, having risen through the ranks of corrupt finance, is not likely to be baffled by the attempts of the UK and other authorities to fetter his ambitions.  And there are at least two resources that are more or less open to the world.  One is barter, an ancient means of gain.  Russia has much to sell, including, wheat.  (Ukraine is good at wheat, which is one reason why Putin wants it.)  Canada would have to work hard at equaling a Russia-Ukraine axis in wheat. There are numerous countries who have something the Russians want which they are willing to supply.  This transaction need not entail serious banking at all.  The second is Bitcoin, which took a 9.3% gain last week.  Many investors distrust Bitcoin, and the Fed hates it as does Bill Gates.  But, as the Financial Times wrote last year, ‘In the world of online crime, cryptocurrencies are the payment method of choice.’  They have the priceless advantage of anonymity.

Russia poses a massive threat to the liberal world order.  I cannot see it defeated or neutralized any time soon, but the full panoply of national propaganda is now deployed to that end.  The British people are not used to being consulted, and have not been here, but they have many other reasons for discontent to which the costs of the Russo-Ukrainian war are now added.  The valiant-for-Ukraine speechifying of Boris Johnson cuts no ice with the public, for whom the war is none of our business and are much more concerned with the rising cost of living.  Johnson’s policy is to get involved with the European conflict.  What is the point of Brexit if we go on to espouse ardently pro-European causes?  All this cannot have a good ending for the Government.