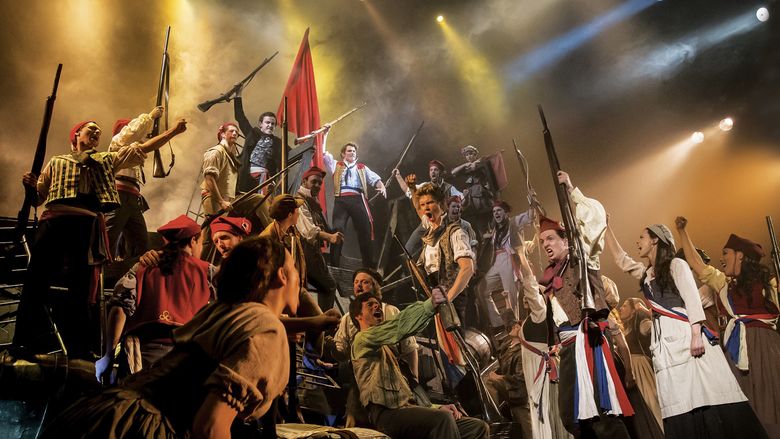 Few people will have read the whole 1500 pages of Victor Hugo’s novel Les Miserables, but millions have seen the  stage and film adaptations of the novel, illustrating, as the author said, progress from evil to good, from injustice to justice, from falsehood to truth. Inherent in the complex story is the political context of the June 5-6, 1832 anti-monarchist insurrection in Paris, the riots and protest against the new king Louis Philippe who had been attacked from different political points of view. France at the time was the scene of economic problems, food shortages, increases in the cost of living, the degredation of women, and outbreak of cholera that had killed 18,000 in Paris for which the government was blamed as the perpetrator of poisoned wells.

History in France does repeat itself. The gulf between ruler and ruled has been constant in French history. Since 1789 that gulf has led to removing three kings, two emperors, several presidents, in a country that has had 15 constitutions. Paris remained troubled by insurrections against the establishment and the supposed inequities of the social system, leading Baron Haussman in 1853 in the reign of Napoleon III to begin building the wide, accessible boulevards that are a model of beautiful city planning, and were designed to maximise visibility for security forces to protect the capital.

In July 2018 those streets were full of soccer fans celebrating the French victory in the World Cup. In November-December 2018, those boulevards are the venue of violence as a result of the escalation of the gilet jaunes,yellow vests, movement, that started from an on line petition by a cosmetics saleswoman, who was then joined by a truck driver from Seine et Marne, east of the capital. On November 17, 2018, 300,000 protested not only in Paris but in the streets of the country, blocking traffic and fuel depots across France.

Now in its fourth week, the protest movement originally peaceful and aimed at the government planned increase in the fuel tax turned violent, and continues even after President Emmanuel Macron promised to suspend the tax . Paris has witnessed fires and arson in the streets, smashing of shop windows, looting and stealing, tearing down barricades from store fronts, cars set ablaze, graffiti on public buildings including the Arc de Triomphe, and destruction of the railings in the Tuilleries gardens.

The consequence of rioting by thousands and the response by police has been lockdown in Paris. On December 8, 2018 more than 89,000 security forces, across the country, were on duty to control further violence, using tear gas and water cannons, forming a ring of steel around the presidential Elysee Palace, placing armored vechicles around the Arc de Triomphe, setting barriers to metro stations, closing tourist attractions such as the Eiffel Tower and the Louvre . On December 8, 125,000 demonstrated throughout France, 10,000 in Paris. More than 1,300 were arrested in the country.

The protest movement can be examined in terms not only of French politics but also of changing European attitudes to governing elites and the impact of globalization. First, the policies and character of Macron’s rule. In his speech on November 11, 2018 Macron had been critical of nationalism, the “betrayer of patriotism,” with demons ready to wreck chaos and death, implicitly the European political populist currents in Hungary, Italy, Spain, Brexit. That is the basis of his approach to European and international affairs, particularly regarding climate change, a strong sovereign Europe, reducing French public borrowing below the EU target of 3%, as well as revitalizing the economy and making it more competitive.

Macron has a governing style, actively exalting the presidential role, now seen by many French people as arrogant and aloof, the contemporary version of the god Jupiter high in the clouds ruling above political chaos, and delivering political thunderbolts, knowing that gods have problems with mortals.

It is Macron’s concern with implemenation of policies to fight climate change by imposing a fuel tax that sparked mortals to protest in the country. This in itself can be considered unwise since France is already the most heavily taxed country in the developed world, with a tax of about 46% of GDP (the U.S. has 27%). It results from social insurance, payroll, property, consumption taxes that fall hardest on the working and middle class.

The fundamental problem is that the proposed fuel tax on gas and diesel, required by Macron to fight the climate issue, affect those same lower and middle income groups. On December 5, 2018 government officials announced that the proposed fuel tax intended for January 2019 was suspended  Macron was for turning, but the riots continue, by the diverse body of protestors, mostly in rural areas and suburbs.

The particular issue illustrates three general factors. One is that different areas and social groups are affected differently by taxes. A second is that societies cannot exist on the basis only of progressive taxes. The third is that reforms or actions in compliance with international proclamations, such as those in connection with climate change proposals incur inevitable costs, and costs that will be borne by all members of the society, perhaps disproprtionately by its poorer members.

Similarly, the pro-business agenda of Macron to revive the economy, ending job protection and wealth taxes that impeded production, and reduced manufacturing jobs, has been accompanied by reforms in the labor market, work training, and improved railroads. In opposition, critics have called for restoring the wealth tax, increasing pensions, raising the minimum wage, ending cuts in housing allowances and unemployment insurance.

The opposition to the fuel tax led to other unrelated issues, and decrease in  Macron’s approval rate, now  21%, while 72% have sympathy for the gilet jaunes.Candidate Macron started his presidential campaign with only 24% of the vote in the first round of the election, and then created his En Marchemovement to win on the second round. It is an open question whether someone similarly may emerge as a leader from the yellow vests movement which is unorganized and leaderless.

That gilet jaunes movement started as the result of a specific issue, the proposed fuel tax, seen as economically harmful by motorists, but which is the outcome of developments in the French economic system that have benefited large cities and the wealthier part of the society, but meant insecurity in peripheral France where working class and lower middle class live. The present disturbances are a reminder of the peasant revolts of the past and of the movement led by Pierre Poujade.

They are also a reminder of unforseen consequences of a critical movement. This is true of the high school students in France. It is quaint to see how a protest  to end a gas tax hike has morphed into protest of educational reforms. On December 6, 2018, some 153 French students, some as young as 12, wearing backbacks, were arrested at their high school in Mante-la-Jolie, thirty miles west of Paris and forced by police to kneel in the dirt. The students had threatened to burn down the school during a day of protest against what they considered the ignoble proposed governmental educational reforms. The students, offshoots of the gilet jeunes, yellow vests, movement that has caused chaos in France for three weeks, might now be seen as gilet jeunes, using gas canisters, baseball bats, setting cars on fire and barricades on more than 200 high schools.

The student activity was not humanitsarian in nature but was directed against the educational changes proposed by Macron. Since the 1960s students who pass the baccalaureate, the high-school exit exam, have the right to enter a university in their home area. This led to oversubscription and overcrowding in certain subjects, in law and psychology, to an unpopular lottery system, and to an increasing number of dropouts. About 60% of students do not finish their first year of university.

Macron wants  to end the lottery system, and for universities to be able to select applicants on the basis of merit. This would be a selective system akin to that exiting for elite instituton suh as the highly selective Grandes Ecoles, especially the Ecole Normale Superieur.

French President Emmanuel Macron is not the reincarnation of Napoleon III, let alone Louis XVI, but the object of discontent, the political leader under siege as a result of the populist wave. He is expected to meet with trade unions, employers’ organizations, and elected officials to formulate concrete proposals to address the issues raised by the yellow vests. Those issues cannot be settled by waving a magic wand, but all recognize the Champs Elysees cannot be a dangerous zone or that the Mona Lisa be left all alone in the Louvre.

PrevIt’s a ‘toxic atmosphere’ for Jews and Israel
The Terror of Existence: From Ecclesiastes to Theatre of the AbsurdNext