Wikipedia (and other sources) explaining Putin and his “partial mobilization” 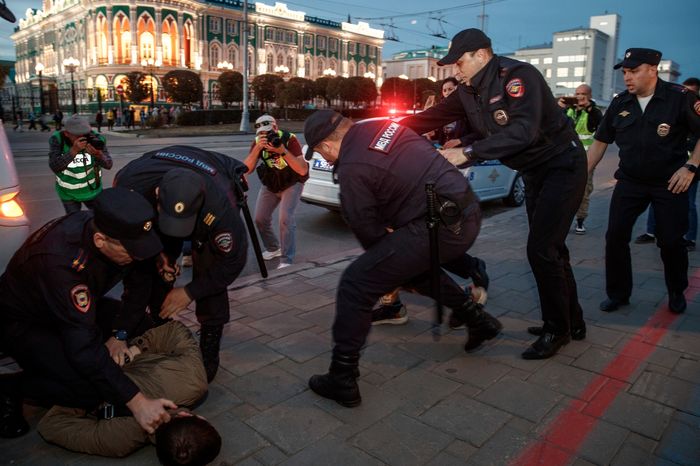 Protests break out in Moscow after Putin announces “partial mobilization” of reservists.

Before I heard Mr. Putin’s announcement of the “partial mobilization” of 300,000 reservists for the Ukraine war, I thought that it was Russia that on February 24 attacked Ukraine. According to Mr. Putin’s speech — to which I listened in its Russian original, it is not so. To hear him explain it, in the “special military operation” Russia merely defends its territorial integrity against “aggressive policy of Western elites which aim to maintain their mastery by suppressing people’s sovereignty in an attempt to split and destroy Russia — using unrelenting, decades-old Russophobia, especially in Ukraine which they turned into anti-Russian bridgehead by using Ukrainians as cannon fodder and pushing Ukraine into war with Russia.”

Go figure. Where one would have concluded from the Russian behavior that it was Russia trying to “suppresses people’s sovereignty” — the people in question being Ukrainians, according to Mr. Putin it is Ukraine which is trying to suppress the sovereignty of Russia — apparently, in Russia itself, rightfully necessitating a war.

How to explain this contradiction between a well-documented fact of a Russian attack almost seven months ago, and Mr. Putin’s claim of righteous self-defense in the face of vicious Ukrainian aggression?

Against all odds, it is apparently doable. Mr. Putin’s speech rang a bell, bringing to mind a word “projection” — and more precisely, as it turned out when I reached out to Wikipedia, “psychological projection.”  I will not try to improve on Wikipedia but will simply quote: “In its malignant forms, it is a defense mechanism in which the ego defends itself against disowned and highly negative parts of the self by denying their existence in themselves and attributing them to others, breeding misunderstanding and causing untold interpersonal damage. A bully may project their own feelings of vulnerability onto the target, or a person who is confused may project feelings of confusion and inadequacy onto other people. Projection incorporates blame shifting and can manifest as shame dumping.”

This explains everything in Mr. Putin’s speech. He projects his own urge to “suppresses [post-Soviet] peoples’ sovereignty” — as manifested in his aggressive actions — upon Ukrainians and their Western supporters; when talking of oppressors of peoples’ sovereign freedom, he unconsciously describes his own self. His denunciations of the West are really nothing but self-revelations.

Equally interesting is Mr. Putin’s remedy for the present military situation in Ukraine. His notion of a partial draft also rang a bell, reminding me this time around not of psychology or Wikipedia, but of something from Soviet life. Back when Russia was USSR, some people drank pretty much anything; getting high was achieved, among other methods, by ingesting furniture polish, shoeshine, and other industrial and household substances not normally associated with human consumption. One had to be very careful though: when drinking glue, for instance, it was imperative not to stir it, but to only drink the layer of liquid sitting on top — a very delicate process indeed. The lower layer was sure to kill the incautious drinker. Mr. Putin’s “partial mobilization,” being a forced step taken in the absence of other options, is also a substitute for hoped-for quick victory, very much like that of vodka for glue. And as in drinking glue, it is an equally delicate maneuver that must — if one has no other option than to do it — be done cautiously. Mr. Putin wants to get a military fix — but in a dose that won’t be harmful to his authority and power. Mobilization is a very dangerous tool which, until now, he tried to avoid — so as to avoid unpopularity that necessarily accompanies it: it is one thing to root for Mother Russia against Ukraine in front of a TV screen — but being in the trenches is a different matter entirely. Yes, victory over Ukraine is popular in Russia — but dying for that victory is not. The mobilization would completely erase popularity of the war, potentially causing protests and making governance harder. A partial mobilization announced by Mr. Putin, however, is arbitrary by its very nature — one can draft conscripts selectively, from the poorer regions and families that are less likely to protest — very much like drinking the safer layer of glue.

Whether this “partial mobilization” will improve Russian chances in war remains to be seen. To end the war, it would have been best to end Mr. Putin’s “psychological projection” of himself upon Ukrainians that is echoed and amplified Russia-wide by his propagandists who look at themselves in the mirror and see Ukrainians (and the “Kiev regime,” as they put it) as “Neo-Nazis,” but unfortunately Wikipedia does not list remedies for this psychological condition, making one rather pessimistic on this account. But drinking glue is not good for the health, either. No matter how carefully done, it may well backfire. Time will tell whether Mr. Putin’s “partial mobilization” will go smoothly, and will produce the results he hopes for, or whether it will stir trouble and mark the beginning of the end of his “Moscow regime.”