It’s nine years since Fusilier Lee Rigby was murdered  by two jihadi acolytes of Anjem Choudary in broad daylight on a London street. As will be remembered by many of you  Fusilier Rigby was leaving the Royal Artillery Barracks in Woolwich south London, not in uniform but wearing a Help for Heros charity t-shirt when he was knocked down by a car. Two men got out (Michael Adebolajo and Michael Adebowale) they produced a machete and beheaded the unconscious man.

No one who saw it will forget the video of Adebolajo holding the bloodstained axe in his soaked fingers talking to camera about the wrongs done to Muslims and Islam by the wicked British army.

Fusilier Rigby has a dignified memorial in his home town of Middleton in Manchester and one of the local newspapers published this tribute last week. It should be remembered that today is also the  5th anniversary of the Manchester Arena bombing when a suicide bomber from Libya killed 22 music fans, mostly women and girls at a pop concert. There have been a great many events in Manchester today to commemorate the victims and celebrate their lives. 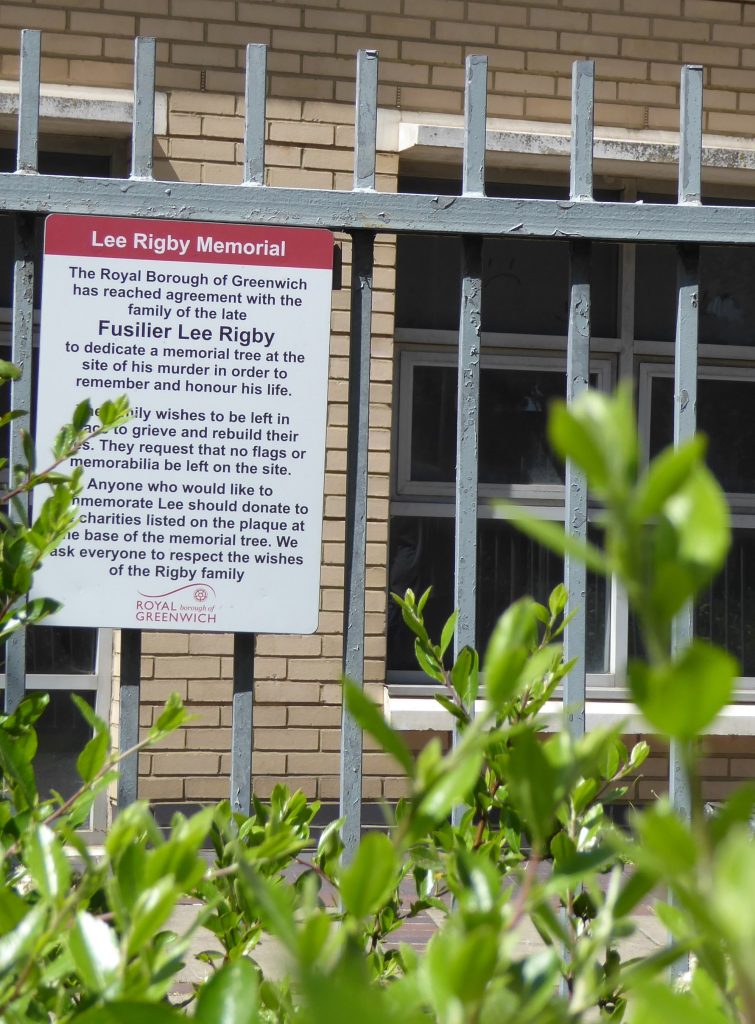 In London both mayor Sadiq Khan and Leader of the Opposition Sir Kier Starmer got the number of years since Fusilier Rigby’s murder wrong, although at least Sir Kier did describe the murder correctly as a “murder by Islamic Terrorists”. To Sadiq Khan he was merely “killed”. Sir Kier Starmer’s tweet was quickly taken down when the error was noticed. It took the Mayor’s office most of the day to correct the error.

Greenwich council were reluctant to have any sort of memorial in Woolwich by or near as possible to the spot where Lee died. But after they realised that tributes were being left no matter how quickly they swept them away, after consultation with his mother a tree and memorial stone was permitted on the corner green some yards from the site.

As in previous years (pandemic regulations permitting) friends have met in Woolwich to place flowers. This year was no exception. More low key than in previous years ( The scooter ride was earlier in the morning; they left a very dignified wreath, picture below, top centre, purple and white) there was a steady stream of men and women with flowers and wreaths making their way to Wellington Street. 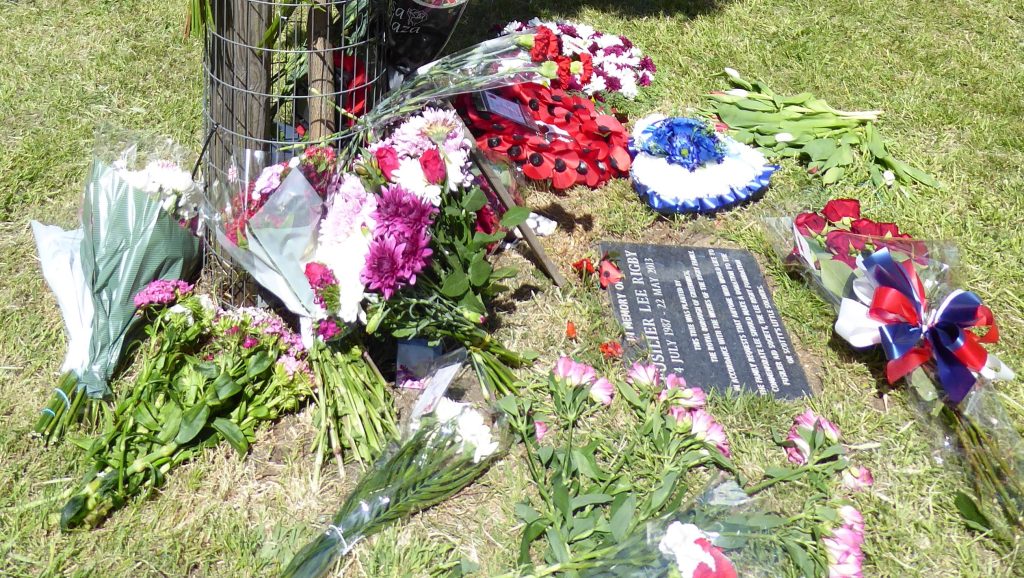 Our (NER and readers) contribution were the pink, red and white Sweet William bottom left.  Most popular were carnations and roses in the regimental colours of red and white.  A minutes silence was held. Then the bunches of flowers laid on the ground were all tied tidily to the railings protecting the tree so that they were off the ground and out of harms way. 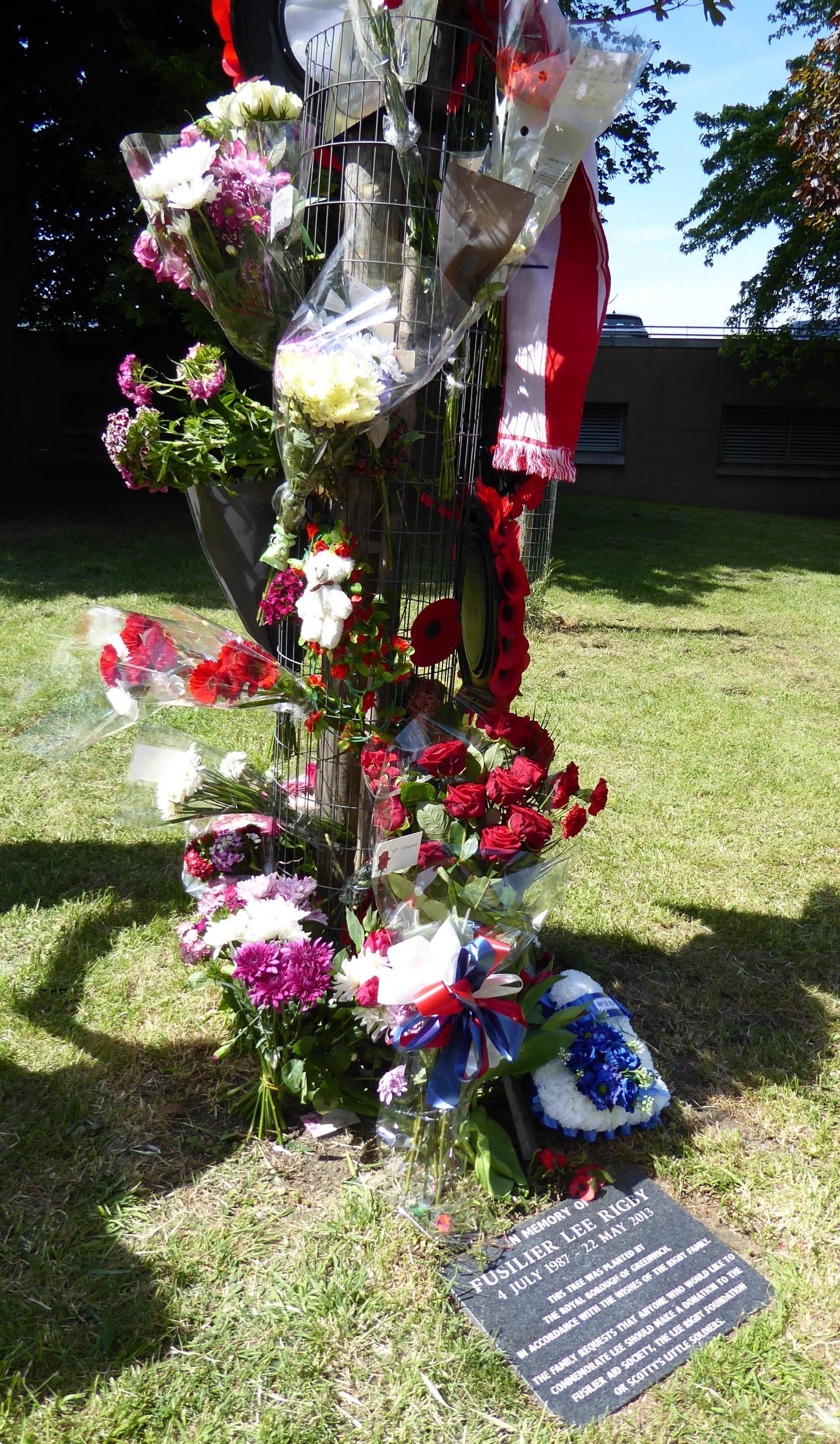 As we stood by the tree several drivers tooted their car hooters and called messages of support. And one hurled abuse from the safety of his motor, and then sped off.

A reminder of the need for constant vigilance.

PrevNER’s Second Salon: a Good Time was had by All
The Waning of the Kennedy CultNext