Youtube whistleblower: My warnings over terror videos were ignored

From the Jewish Chronicle

YouTube routinely ignored warnings from its own moderators to take down antisemitic videos, including some that inspired the Texas synagogue gunman, a whistleblower has told the JC.

The refusal to delete the incendiary footage, which glorifies terrorism and brands Jews “agents of Satan”, makes a mockery of the web giant’s supposed commitment to safeguarding users, the whistleblower said.

Former moderator Khaled Hassan, 31, who was employed to identify extremism in Arabic language videos until two months ago, accuses YouTube of “shirking its legal and moral responsibilities”.

In shocking testimony, the whistleblower reveals:

Reacting to the JC’s investigation, Culture and Media Secretary Nadine Dories condemned YouTube’s failure to combat hate speech, and pledged that her Online Safety Bill would compel it to in future.

This newspaper has repeatedly reported the fact that extreme antisemitism is widespread on YouTube, most recently after Ikram’s hostage attack. This is the first time that the firm has deigned to answer our questions, let alone remove content we identified to it. 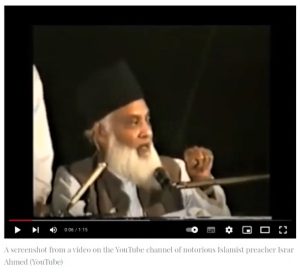 Among the YouTube videos that triggered Mr Hassan’s concerns are dozens in which late Pakistani preacher Israr Ahmad spouts undiluted Jew-hate, with titles such as “New World Order, Jew World Order”. The videos call Jews “this cursed race”, “the ultimate source of evil” and “the biggest agents of Satan”. One video, recorded in Urdu, says Jews “are akin to pigs”. Others quote the notorious forgery, the Protocols of the Elders of Zion. This newspaper has seen a detailed report sent to YouTube by a member of Mr Hassan’s team at Crisp, warning that Ahmad’s antisemitism was so extreme it was likely to cause “real world” attacks against Jews.

On January 15, almost three months after report was sent to YouTube, the Blackburn terrorist Ikram took four hostages at the Beth Israel synagogue in Houston, and was shot dead after a nine-hour siege.

This week three of Ikram’s friends confirmed he was radicalised by watching Ahmad’s videos.  told the JC he saw him watching films in which Ahmad condemned Jews for “dominating the world”. “He sent me an Ahmad video on WhatsApp a few weeks before he left to attack the synagogue,” he said.

Mr Hassan said that in January, he was told that any time he wanted to flag a video that mentioned the conflict in the Middle East, his work should be vetted by a Palestinian because he had “issues with Palestinian stuff”. He said he was then moved to a job where he no longer vetted videos, and resigned this month.

PrevAll Aid Short of War
The Mystery of Thorne SmithNext