Hard on the heels of the Free Tommy Demo in London on Saturday came the annual Al Quds march calling for Death to Israel. I had a prior engagment for once so I couldn’t attend the groups countering the abomination (terrorist flags off our streets!) but enough of my friends did that I have some photographs and eye witness accounts of what was happening in and around Mayfair.

With the US embassy moving to South London the Islamic Human Rights Commission who organise it decided it would be held outside the Saudi Arabian Embassy in Charles Street, a little further than Grosvenor Square and nearer to Green Park.

Prior to the march the IHRC wrote to London mayor Sadiq Khan seeking his assurance than the march would be protected from Zionist and Far-right extremists and telling him that “We are heartened that you have now distanced yourself from the extreme groups who were targeting Al-Quds Day last year….” As we never get a satisfactory response to the little matter of the terrorist flag of Hezbullah fluttering on London’s streets I don’t think he, nor any Home Secretary for the last 10 years has ever been ‘on side’.

The Zionist Federation who organise the Jewish counter protest were also worried about ‘far-right extremists’.

“Let us be clear: the ZF, as well as our partners, do not support, encourage or condone any far-right or neo-Nazi groups or messages, either from outside our community or inside it.”
The organisation said it had been trying to arrange a “separate area for those on the far-right to demonstrate in and to keep them well away from the ZF demonstration,” but that the police had said this “may not be possible”.

The Zionist Federation can rest assured that the non-Jewish groups that have countered the Al Quds parade for many years (I first met March for England after Al Quds 2009 and they, with the Free Secular Iranian Exiles had been countering for several years previously) also do not have any truck with neo-nazis and the like. I don’t think neo-nazi groups will ever get involved with groups that support Israel. This is the Zionist federation’s third year, their first was 2016, countering Al Quds, and probably March for England’s twelfth. Give credit for the sometimes small groups who braved this parade annually in earlier years.

To my knowledge yesterday members of March for England, the EDL, Pie and Mash, football lads and sundry maveriks and privateers (in the motorcycling sense) roved trying to stop the march at various points. The Zionist Federation had a static rally near the Saudi embassy 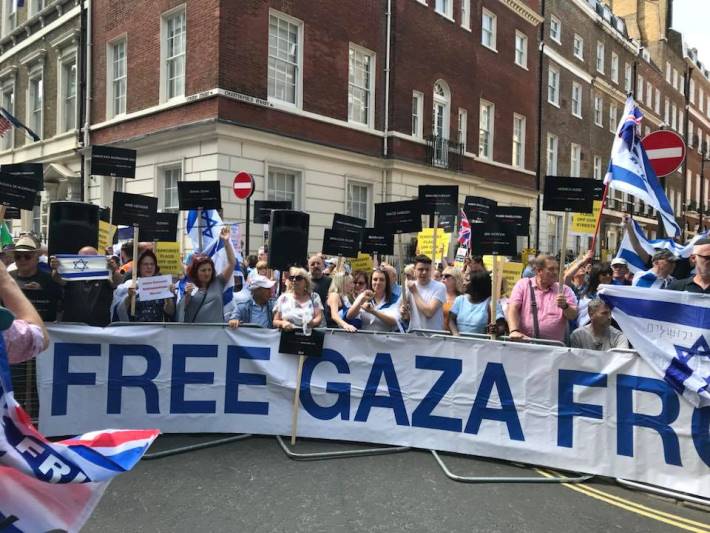 They also had supporters roving to block progress, incuding dancers and musicians. 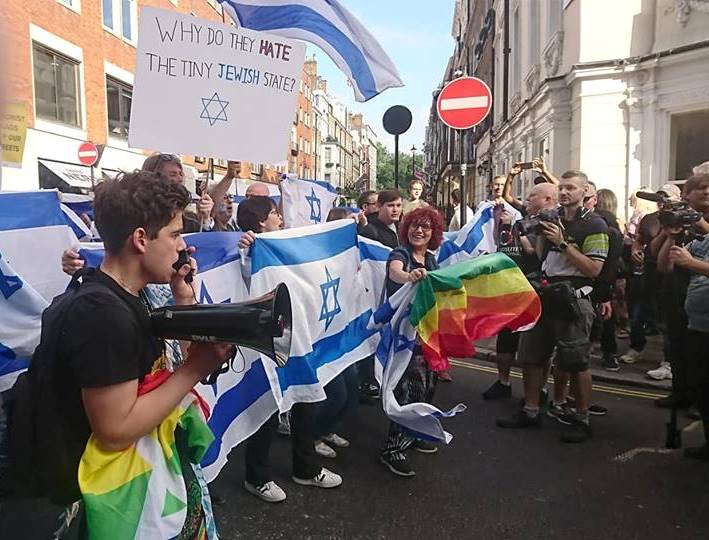 They sat down in the road. 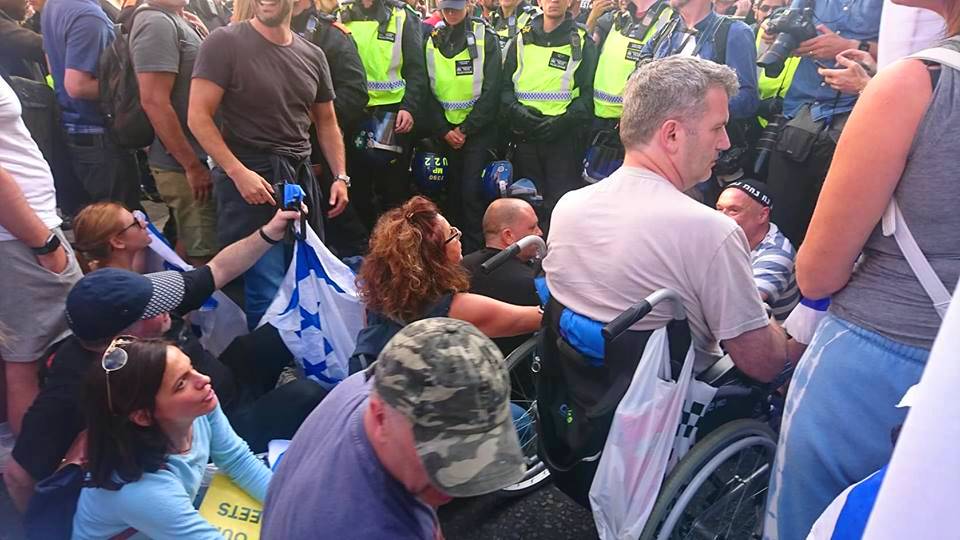 The gentleman using the wheelchair is a lawyer named Mark Lewis. At one point he and his partner Mandy blocked the march by standing alone in the middle of the street. A picture of this was tweeted around; my friends who described his bravery as ‘humbling’. These are his thoughts this morning in The Jewish News

The saga which led to the bizarre situation that we were threatened with arrest to protect the rights of those waving the terrorist flag of Hezbollah adorned with an image of an AK47 gun was a farce but the fact that the Al Quds rally itself was allowed was not funny….the Police enforcing the will of the Home Secretary saw a wheelchair as a greater threat than a machine gun.

The stand off was not planned. I had moved to the route where the marchers had planned to go thinking that a large number of people would do the job that the Government should have but the Police following orders from on high moved us all away. Mandy and I refused to go.

A civilian support worker told me that I had to move. My lawyer’s mind kicked in, and I asked why? He walked away.

Two officers came and told me that the marchers would walk around me and they “could not guarantee my safety”. “That’s ok” I said, “I never asked you to, I’ll take the risk”. They walked away.

Another officer then told me that I had to move and that the Police had an order closing the street “ can I see it?” He shrugged and walked away mumbling that it was in a van somewhere.

After 45 minutes, a different officer told me that she would arrest  us. I pointed out that the Police had said we could stay and so we were doing nothing wrong. She then went away and then came back to withdraw my permission at which point she warned me that we would be arrested. The Police had chosen the side of the terrorists.

And so it was that after nearly an hour a Police Support Officer moved me down the street. 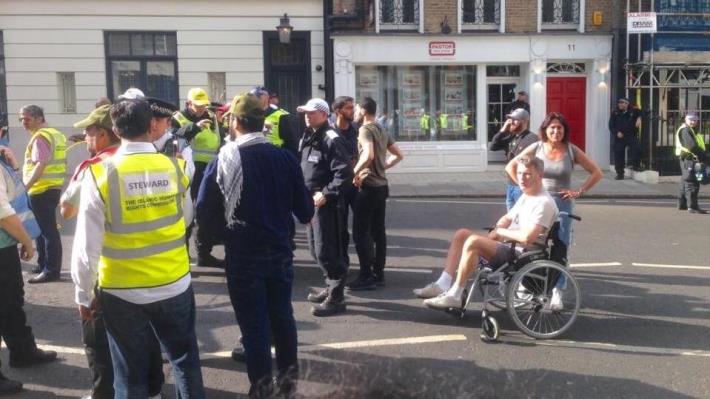 Photograph from the Jewish Chronicle, originally Sussex Friends of Israel 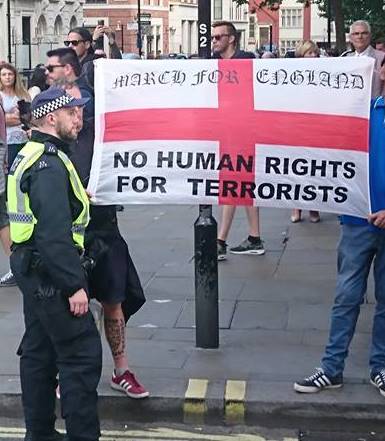 Elsewhere I am told that the police were trying to contain the other fast moving groups, kettleing some of them in Shepherds market. However the sight of the March for England banner “No human rights for terrorists” halted the parade who were then harangued causing further delay until again the police threatened the counter-protestors with arrest on various non charges.

The parade is notorious for starting late to the advertised time in previous years. At first I thought it was incompetence on the part of the organisors, then I realised it was arrogance. We move when we want; your concept of punctuality is nothing to us. However the counter demonstrations delayed the start of the march for at least three hours, sufficiently long that many marchers left before it began as they had coaches to catch back home. This gave some of my friends an opportunity to engage them in some intellectual debate. 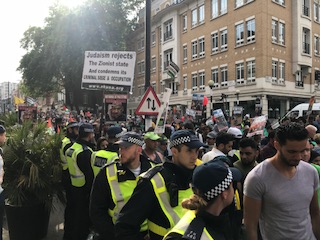 When asked by one friend about the 1200 Palestinians butchered in Syria recently, most didn’t know or wouldn’t respond apart from one chap who said Isis did the killing and they are backed by Israel. Girls with hair showing who were asked why they were on a march sponsored by a government that would lock them up for being out in public dressed like that just jeered.

The numbers were less than in previous years and only 1000, maybe less, marchers made it to their rally near the Saudi Embassy.

One friend described it as a ‘a day of many small victories but ultimately they marched.’ Another friend heard that had there been a further one hour delay the police were going to order the march called off. As the Police seem more scared of the Muslim marchers than Jewish and non Muslim protestors I suspect that was the reason for the sudden removal with threats of arrest of anybody blocking the route.

This is the march, which was kept on the pavement this year. In previous years they were sufficient in number that traffic in Oxford Street was stopped for them. Note the abomination of that yellow flag. 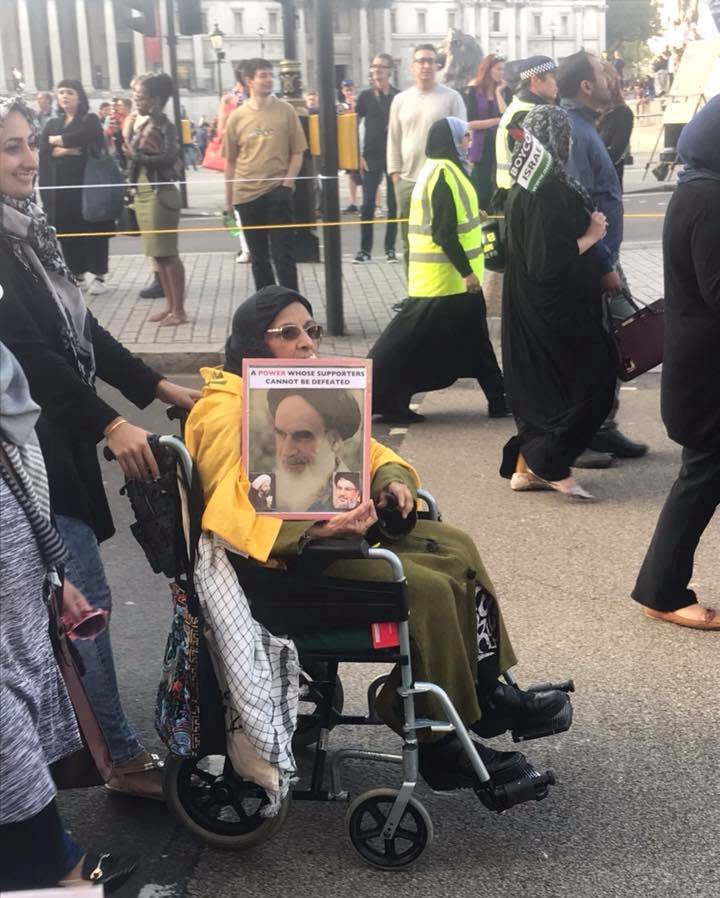 This ‘sweet’ little old granny was using a Hezbullah flag as a shawl.

Nobody of my circle of friends stayed to hear the Al Quds speakers; expected speakers included Mick Napier of the  Scottish Palestine Solidarity Campaign a George Galloway wannabe who sounds more like Rab C Nesbit, and Stephen Sizer an Anglican vicar I would happily have seen de-frocked, thankfully now retired.

So it is from the IHRC twitter feed that I take the horrible image of the Israeli flag being burnt by a member of Neturei Karta while the flag of Hezbullah flutters above. 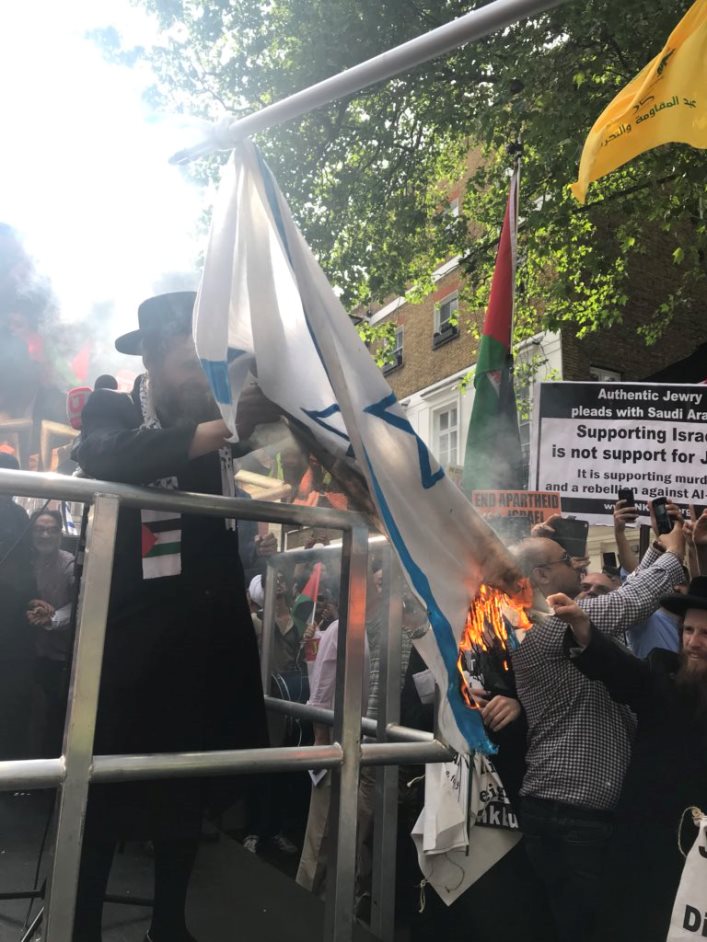 I say this every year but next year this MUST be stopped.

Photographs from media sources credited for such and freinds including Cliff Dixon and others whose privacy I will respect. London 2018

PrevTruth, Veritas, and Knowledge of History in the U.S.
Deadly attacks by shadowy band of young Muslims leave Mozambique shakenNext