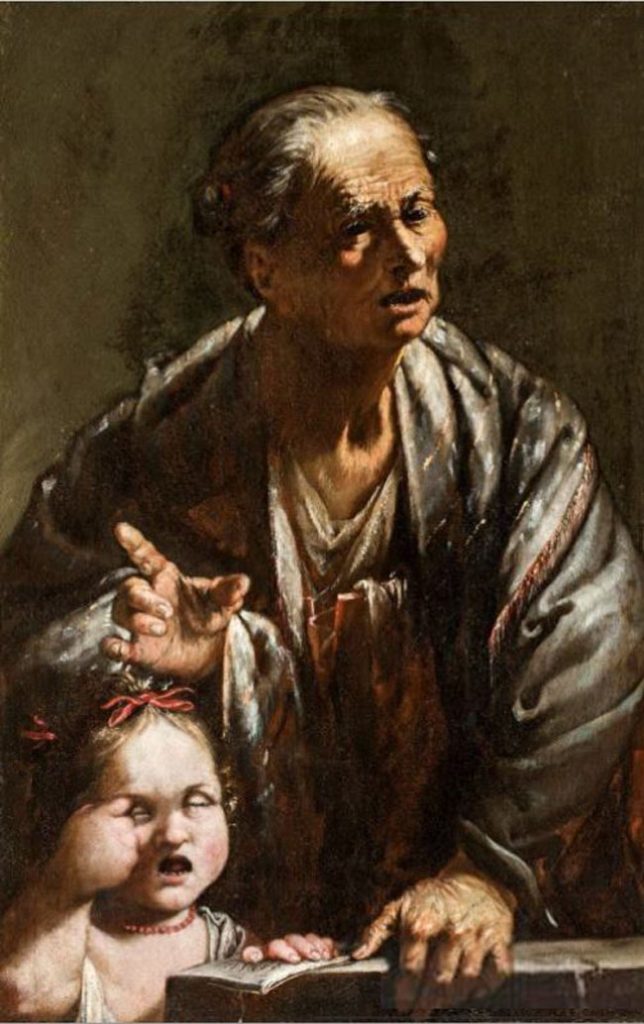 An Allegory of Wisdom and Ignorance, Jusepe de Ribera, 1640

If theory and facts disagree, so much the worse for the facts. —Georg Hegel

Most well-read persons are aware of the episode with Galileo when he had guests who argued that Jupiter could have no moons because of Ptolemy’s writings; Ptolemy had written there were no moons. Galileo trained his telescope on Jupiter and urged them to look and see the Jovian moons with their own eyes. They refused, self-assured, still citing Ptolemy and other Greek writers (during the Renaissance, it was believed that everything that could be known had already been discovered by the Romans and the Greeks, and the best that scholars could do is dig up further writings from that era). Galileo’s guests departed, self-satisfied, having refused to peer into his telescope.

Nowadays, we view that historical event in isolation and smirk at the individuals who refused to look. However, that mentality continues to be present. It is a general phenomenon, one that should be studied by psychologists. We see it manifested today in a number of different events and we may ridicule or become angry at the specific events and details, particularly if it involves religion or politics, unaware that it is a general psychological manifestation, one that is conducive to all sorts of mischief. In other words, we don’t see the forest for the trees.

Many people may not remember, but a few decades back many religious individuals had been told that those persons who were participating in the role-playing game of Dungeons & Dragons were indulging in Satanic practices, trying to actually summon demons and really casting magical spells. They were convinced this was true—in spite of any lack of evidence. It was nothing of the sort, of course, and in fact, players in the game would be fighting evil entities and persons. They were arguing from ignorance. Yet, nothing could change the minds of the anti-D&D contingent. At the time, I was playing D&D and argued with one of these individuals and suggested that he himself could come and watch and see that there was nothing nefarious going on. He refused to verify, no matter how much I urged him to do so, with him ultimately almost running away. His response was typical.

We see the same psychological mechanism at work today.

Let’s take two aspects of the Covid fiasco as an example, since the idiocy is lingering on.

First, the face masks. Although there were studies that showed that cloth face masks were not only useless, but counterproductive (and those studies keep being replicated), although the very same sources would one day say the masks were effective and next day said masks were ineffective, and although the Democrat officials who fulminated against people not wearing masks were often caught off-guard not wearing their precious masks, there was a contingent of Covidians that believed religiously that everyone had to wear masks. Everyone had to obey. Everyone had to conform. Everyone had to submit. I and many others who refused to wear masks were verbally or physically attacked by the Covidians for not conforming (it may be remembered that Galileo was ultimately punished for not conforming as well as for telling the truth). Persons in establishments enforced wearing masks. Logic made no impression on them (wearing a cloth mask to keep out a virus is like putting up a barbed wire fence to keep out mosquitoes). One had to conform! One had to obey! Citing studies that showed how useless were face masks made no impression and they would refuse to read the studies—and this even from medical personnel! One had to submit!

Second, the vaccines. Early on, it was evident to anyone with at least half a brain that Covid was similar to a very bad flu and not another bubonic plague, contrary to what the Covidians were proclaiming. Yes, some people died from Covid, no argument there, but it was not like the Spanish flu, as it was inferred. Nonetheless, defective vaccines were rapidly developed. Many individuals became aware after the first few months that something was wrong with the vaccines and, in fact, with the whole outlook of the epidemic. Some people were developing blood clots and were dropping dead in their tracks, besides other symptoms (they still are!). There is a very good reason why developing an effective vaccine takes years. Nurses and physicians began sounding the alarm. And they were being punished. Read the list of dissenters. At the same time, these dissidents were prescribing and promoting simple proven cures instead of the official, tissue damaging ventilators. The Covidians refused to listen to the “disinformation” and condemned them without even checking them out. Since then, a plethora of scientific studies have come out that have demonstrated that these vaccines are not only harmful, but fatal, and ironically do not prevent Covid (look at 4-vaccine, 2-booster, President Biden). Ironically, it may even facilitate infection of Covid. In fact, natural herd immunity is better than the vaccines. But the Covidians to this day refuse to listen to the physicians and nurses and researchers and refuse to read the studies.

And keep insisting on enforcing vaccinations.

But let us leave the Covid fiasco behind us.

Persons who parrot the message from the media, namely that there was no fraud in the 2020 election, that it is The Big Lie, angrily refuse to look at the accumulated evidence. I have suggested that they at least watch 2000 Mules and if they still believe that there was no fraud, fine, but at least they would no longer be arguing from ignorance, yet they angrily refuse “to waste my time.”

Likewise, similar individuals refuse to view the many accomplishments of President Trump while he was in office, in spite of the suppression of his achievements by the media and in spite of the constant undermining of his efforts by both opponents and false “allies.”

It gets more interesting. With individuals where this psychological mechanism is rampant, some facts will simply not register if it is plainly in front of their faces. One time, I attended a small anti-Sharia rally in the People’s Republic of Austin. Learning of this, Antifa came out in full force and the authorities formed a line separating both groups. I found two things fascinating about this encounter. One, was leftists’ amazing ability to scream slogans nonstop for hours under the hot sun while caught up in a frenzy of hate. The other was that the Communists were all white, yet they constantly referred to us as racist white supremacists, even though it was very evident that there were blacks, Mexicans, Muslims and Asians in our small group, plainly visible. Yet, they saw us all as racist whites. This blindness, of course, has occurred in numerous other occasions (for example, (the head guy of the Proud Boys is a black Cuban, yet he has always been referred to by the media hivemind and Antifa as a white supremacist).

And there is also an auditory component to this phenomenon. Leftists often hear some conservative speak and the former will state that what the conservative really means, or that it’s code for X. For example, there was a leftist politician or reporter (I cannot remember which) who cited President’s Trump’s words to protest peacefully at the Capitol, as being code for violence and insurrection.

Now, here is where it gets even more interesting—and psychologists should really be tripping over each other to research this.

On at least one occasion, a therapist who has had a patient with anorexia nervosa, weighing 70-80 lbs, has had the breastless, hipless patient strip to her underwear and placed in front of a three-way mirror. She has been asked to see how her obsession has rendered her skin and bones, dangerously close to dying. The patient has peered into the mirror, looking intensely at every inch of her emaciated body—then has responded that all she sees is fat, fat, fat. Her perception has been warped.

I believe that this is the same mechanism at work, except that one is in a clinical setting while the others are not.

How I wish I was back in an academic setting to research this.

Armando Simón is a trilingual native of Cuba, a retired psychologist and the author of When Evolution Stops, Very Peculiar Stories and The Book of Many Books.