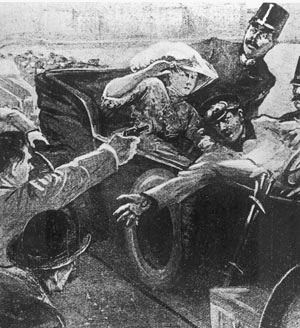 Unless you happened to catch the 30 second news item on May 22, 2006 on the more internationally-oriented networks such as the BBC or CNN, you probably don’t know or care that Podgorica is the capital of the newly independent (actually renewed independence after 90 years) state of Montenegro. The independence supporters gained a narrow 55% majority with the aid of many migrant voters returning from abroad and restored the map of the Balkans to more what it looked like in 1914.

The old “new” country has a total population of just over 700,000 and deprived Serbia its access to the sea. At the end of the Balkan wars on the eve of World War I, the demand for a union of the Southern Slavs into one “Greater Serbia” (eventually to be called Yugoslavia) was the great cause of all those who set what came to be called “national self-determination” highest on the totem pole of human endeavor.

In 1914, Montenegro was an independent mini-state and absorbed by Serbia without protest following World War I as the first step on the road to expansion of a “Greater Serbia” and the eventual creation of Yugoslavia. Since 2006, the process of Balkan nationalism came full circle, as the last remnant of the old Yugoslav state, with Serbia as its core, evaporated into a puff of thin air.

The assassination of the Austrian Archduke Ferdinand by a Serbian nationalist, Gavrilo Princip, with the hope of involving the entire world in a great war in order to “liberate” the Southern Slavs of Bosnia-Herzegovina achieved an objective that very few on the Allied side ultimately believed justified the enormous loss of life and material destruction that set Europe back into the Dark Ages. The cause of the terrorists was all the more senseless as Ferdinand was the most liberal of any potential successor to the Emperor Franz Josef and willing to expand the empire’s framework into a three-way partnership to include the Slavs alongside the German speakers and Hungarians. His liberal stance made Ferdinand the hated target of reactionary forces within the empire, intent on continued subjugation of the Slavs. A brilliant new film, “Sarajevo”, gathers the historical evidence and makes the most plausible explanation of who was behind the assassination.

Of course, there had been other issues that were supposed to be resolved with the conclusion of the Versailles Treaty such as the independence of Poland, Czechoslovakia and the Baltic states, as well as the return of Alsace-Lorraine to France. All of these arrangements have stood the test of time in spite of another world war and the dominance of the Eastern European nations by the Soviet Union. Nevertheless, the match that lit the bonfire of world war was Serbia’s aspiration to expand its borders and repeat the annexation of other territories as it had done with tiny Montenegro.

The dream of Yugoslavia turned out to be a nightmare and the divisions and distinctions between the many Southern Slav peoples and neighbors in language and religion–Serbs, Bosnians, Croats, Slovenians, Montenegrins, Bulgarians, Greeks and Albanians only reemerged with delayed hostility. The result was continued carnage in World War II and the mini-wars in Bosnia and Macedonia.

Much the same scenario has been prevalent among the Arabs in general, the Syrian Civil War and between the various Palestinian factions which even the liberal media, ordinarily sympathetic to the Arab Palestinian cause, have been unable to mask or call by any other names than “killing their own people,” “anarchy,” “running amok,” and “going on a rampage.”

The Serbian assassin Gavrilo Princip who went to his death a happy man, knowing that he had involved the world in war to “Liberate his Slav brothers and turn Serbia into a larger state,” has to rank alongside of Yassir Arafat as a colossal failure. The latter’s career of murder and mayhem made him a cult figure among all those who still believe that a basic injustice was done to the Palestinian Arabs in 1948 and ever since.

The Palestinian leadership rejected the compromise offered to them in 1948 and have since then, instead, continued their vainglorious masochistic revelry in “martyrdom” and confrontation. Arafat, too, went to his death confident in the notion that he had rejected what he saw as a humiliating peace compromise of two states living side by side in peace. He preferred a vision that future generations of Arabs would be enthralled with—which was his promise of further conflict in the hope of eliminating Israel. What was untenable about the compromise was not the fear that it offered the Palestinian Arabs a state that might not be viable, but that it ensured a viable Israel. As Abba Eban and Golda Meir so correctly stated, the Palestinians never miss an opportunity to miss an opportunity.

The Arabs and the Southern Slavs have indeed come full circle. The expansionist Southern Slav statelet of Serbia that had annexed Montenegro went on to devour the remaining territories only to collapse in a paroxysm of violence in the 1990s and split apart. Likewise, the Arabs who boasted of the just cause of a unified Arab nation, and in possession of untold wealth and resources, now wallow at the bottom of every measure of health, education and welfare, and are at each other’s throats.

The favorite question historians love to ask and bored cynical schoolchildren would love to have answered is “Does history teach us anything?” Looking at the ongoing disintegration of the Palestinian authority after years of massive subsidies and political support from their Arab allies, naïve European sympathizers and Third World imitators who learned from them the art of hijackings, kidnappings and terrorism against innocent civilians, there is all the more reason to emphatically answer this question.

The answer is often couched in the euphemisms and the political “newspeak” of polite diplomacy and historical examples that are frequently misused in feeble analogies. Yassir Arafat should have accepted the offer made by Israeli Premier Ehud Barak with the blessing and promised billions of dollars made by President Clinton.

After the two world wars, the Southern Slavs are more divided than ever and there is a growing nostalgia for the old benign Hapsburg rule and reminiscences of the progress that had been made in the Empire including the flourishing of the arts and sciences and the promise held out by the prospect of including the Slavs fully.

Should the Palestinians in border areas along the Green Line ever really participate in a plebiscite were there to be a mutually-agreed upon vote to decide citizenship, there is little doubt that whatever has been said or done in the past, a majority in the “territories” would prefer Israeli rule than the prospect of chaos and anarchy or reversion back to the Jordanian Kingdom which already has a Palestinian Arab majority of close to 70%.

A stable Palestinian entity of some kind with close links to Israel and Jordan would have solved the refugee problem and allowed the Palestinians to participate in building their own institutions in an orderly fashion without the numerous terrorist militias that continue to threaten Jordan, Lebanon and Egypt even more than Israel (much as the extreme nationalist program of “Greater Serbia-Montenegro” threatened to upset the entire Balkans rather than just absorb Bosnia-Herzegovina). For those who have preached about the necessity of another Palestinian state, let them contemplate the constant tension and potential for conflict that exists today between the “Two Chinas” and the “Two Koreas” (don’t forget the “Two Vietnams”) and the experience in Europe for more than 40 years of “The Two Germanies”.

There are currently four Palestines—Gaza, The PLO administering 95% of the West Bank population, the Arab Palestinian majority in the Kingdom of Jordan, and those Arabs who are either citizens of Israel or residents of Greater Jerusalem under Israeli authority.

True, as cynics have always quipped, “allies and enemies change partners every generation”, but the Yugoslav and Palestinian cases are particularly instructive as an example of the fragility of states without an orderly tradition of democratic rights, individual liberties and stable government. Whether the Slavs or the Arabs ultimately unite in a single state or remain fragmented into a host of petty quarreling states should be their own issue and concern. Fifty years from now it is likely that Yassir Arafat will be as little remembered or venerated as Gavrilo Princip.

Norman Berdichevsky is the author of The Left is Seldom Right and Modern Hebrew: The Past and Future of a Revitalized Language.

Norman Berdichevsky contributes regularly to The Iconoclast, our Blog. Click here to see all his contributions on which comments are welcome.