In addition to being condescending and divisive, the phrase “people of color” also obscures reality. 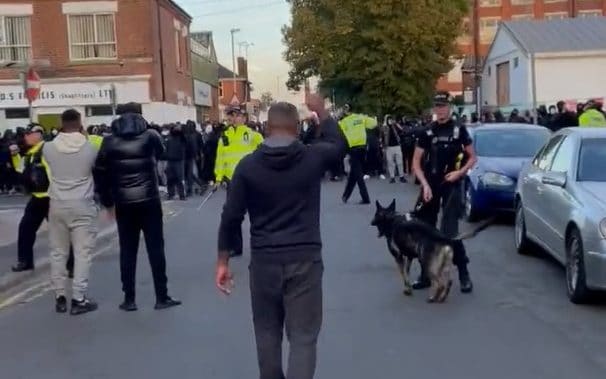 The expression “people of color” has always seemed to me in equal measure stupid, condescending, and vicious. It divides humanity into two categories, whites and the rest, or rather whites versus the rest; it implies an essential or inherent hostility between these two portions of humanity; and it implies also no real interest in the culture or history of the people of color, whose only important characteristic is that of having been ill-treated by, and therefore presumably hating, the whites. Compared with the phrase “people of color,” the language of apartheid was sophisticated and nuanced.

It should not need saying that, as the history of Europe attests, whites have not always been happily united, and that “people of color” do not necessarily form one happy, united family, either. Nevertheless, a recent disturbance in the city of Leicester, in the East Midlands of England, starting several days ago and still not definitively over, came as something of a surprise.

A cricket match between India and Pakistan some weeks beforehand was the occasion of a disturbance involving hundreds of young men in Leicester, where one-third of the population is of Indian subcontinental descent. Cricket is of immense importance, symbolic and otherwise, in India and Pakistan. A crowd of young men with Indian flags gathered to celebrate the victory of India over Pakistan and shouted, “Death to Pakistan!” A video was then posted of a crowd pulling down a saffron flag at a Hindu temple.

What struck me was the extreme reticence in the initial reporting of the events, almost certainly not because of ignorance. Here is how the Daily Telegraph reported the episode at first: “A police chief in Leicester has called for calm after three weeks of disorder sparked by a Pakistan v India cricket match escalated to violence from marauding balaclava-clad gangs.” The article went on to quote the Chief Constable: “‘We have had numerous reports of an outbreak of disorder.’” Another police spokesman: “‘We are aware of a video circulating showing a man pulling down a flag outside a religious building . . . We are continuing to call for dialogue and calm with support from local community leaders.’”

Nowhere in the article do the words Hindu or Muslim appear. The reader is left to guess the leaders of which communities are being called by the police to start a dialogue, and the flag of which religious building was pulled down.

Of course, the dimension of the religious divide could not long be hidden; and both in England and abroad blame, almost always ascribed according to the religious affiliation of the speaker or author, was also soon in evidence. But the Telegraph’s initial report suggested a certain nervousness about straightforward reporting. We all must walk, or talk, on eggshells now.

I was aware many years ago of tensions among “people of color”—for example, when I had a young Sikh patient who, not far from my hospital, had been maimed for life with machetes wielded by young Muslim men, who objected to his dating a Muslim girl. Vigilante groups of both religions tried, with considerable success, to prevent such social contamination. The antagonism went deep, to a level below that of mere consciousness.

The very phrase “people of color” is as mealy-mouthed as any Victorian prude might have wished for and, among other things, is a manifestation of the fear we now live under, sometimes without quite realizing it. Truth has now to be varnished so thickly that it becomes imperceptible.