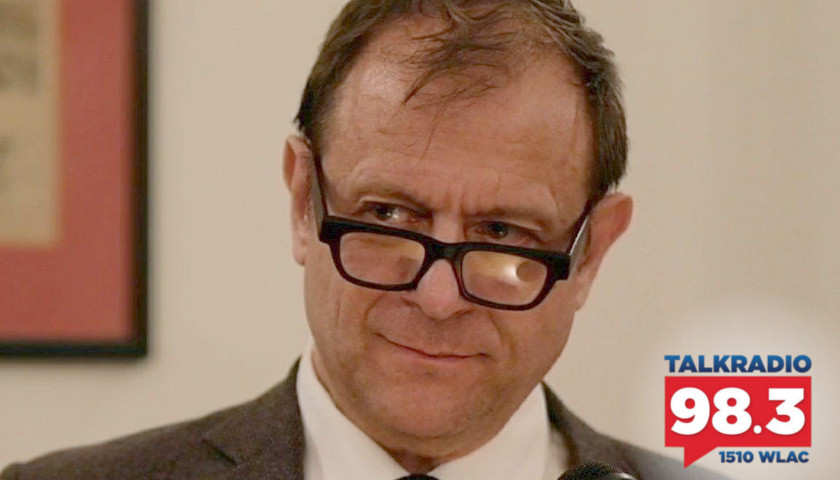 With investment firms such as BlackRock demanding that companies meet environmental, social, and governance (ESG) benchmarks if they want investors’ money, U.S. corporate elites seem to have adopted a left-wing worldview. Does it mean that Big Finance is on the verge of going Red?

No. It’s just a fashionable ideological cover Wall Street is using to disguise its efforts to crush Main Street and bleed the middle class into servitude.

And yes. Insofar as communism is just a utopian narrative that 20th and 21st century ruling classes have used to rationalize oligarchy, the corporate class’s anti-free market rhetoric is evidence of its efforts to impoverish the middle class. Thus, the specter of “woke capital” is haunting America, where money managers such as BlackRock CEO Larry Fink sit at the top of an aspirational dictatorship of the proletariat.

In the latest episode of “Over the Target Live,” historian and essayist Michael Rectenwald explains how woke capitalism “is a monopoly scheme” designed to destroy free-market competition, the pillar of our economic and political system.

Fink and others are monopolists who talk like socialists. And for good reason, says Rectenwald: “Socialism is nothing if not a monopoly.”

Rectenwald is the author of several books—”Google Archipelago: The Digital Gulag and the Simulation of Freedom,” and “Springtime for Snowflakes: ‘Social Justice’ and Its Postmodern Parentage”—documenting the assaults on free inquiry and expression that characterize the age of woke.

In his most recent book, “Beyond Woke,” he explains why he left a top academic post at New York University. After taking to Twitter to parody the ritualized declaration of pronouns, the one-time leftist professor found himself on the outs with unhinged colleagues who called him a Nazi. He saw them as authoritarian shock troops.

“I began to see signs of totalitarianism,” Rectenwald tells “Over the Target Live.” “Talking about changing people’s speech, forcing them to use language and to deny their own senses, to basically repeat patent nonsense as if it’s truth. This is exactly what happened … in the Soviet Union, when people were demanded to speak lies repeatedly. And they had to live by the lie, as it were, and I just wouldn’t have it and it made me rethink entirely my whole political outlook, my whole worldview.”

Wokeness is a euphemism for post-modern totalitarianism. As Rectenwald explains in “Beyond Woke,” it’s at odds not only with free speech but also morality: “If to be moral is to choose right acting, it follows that moral behavior is impossible without freedom,” he writes. “Freedom to choose, and to choose wrongly, is a prerequisite for morality. But wokeness compels choice by group pressure. It either cows one into submission prior to the act, or shames one after it.”

Since leaving the academy, Rectenwald has become a major voice of dissent, focusing his critical acumen on a broad range of timely issues, from trans ideology and the abuse of language to the Great Reset cult and its destructive urges. Regarding woke capital, he argues that the ESG index is an instrument weaponized by corporate elites to eliminate the competition.

The effects on the middle class are meant to be devastating. “This is an attempt to further eradicate middle-class small business owners, because they won’t be able to abide by these ESG precepts, it’s too expensive,” says Rectenwald. “And it’s going to happen in all sectors. But the most frightening one is the agricultural sector.”

Rectenwald points to the Netherlands, where the Dutch government is throwing farmers off their land for not meeting ESG metrics. Dramatic declines in output are likely to follow, which will lead to costlier food and perhaps even famines.

Rectenwald says that in spite of the widespread farmers’ protests, there’s no indication the Dutch government will back down. After driving the farmers out of business, it will “buy these farms and make larger farms under the control of people that actually are able to afford this ESG-indexed production.”

The result will be food shortages throughout Europe, dependent on imports from the world’s second-largest food producer. Already fighting energy shortages, the continent may be destined for hard times ahead.

I ask Rectenwald if watching Europe’s coming pain and suffering will change any minds among the U.S. political and corporate elite. He’s hopeful.

“In order to turn the tide against all this—and what I would call really the Great Reset overall—is there have to be defectors amongst the elite … who will effectively say, ‘Look, this is insanity. This is going to destroy Western Civilization, and we can’t have it.’” Otherwise, Rectenwald fears, “We won’t get a tidal change that’s necessary, at least in the mainstream media, for stopping all this.”

Making the problem worse, says Rectenwald, is that there’s a core of cultists at the heart of the Great Reset movement that appears to have its heart set on apocalypse.

“The End Times is their whole underlying ethos,” says Rectenwald. “They’re millennialists.” The difference between those who long for Christ’s thousand-year reign of peace and the Great Reset cult is that the latter is motivated by resentment.

“They’re fueled by resentment,” he says. “They quite revel in destruction. They’re not looking for the return of Messiah, or … a heavenly afterlife. They’re looking for destroying what they deem to be pernicious on the face of the earth today, and they are anti-human at base.”

Rectenwald is finishing a new book about the movement, “The Great Reset and the Struggle for Liberty: Unraveling the Global Agenda.”

“I go deep into the history of the World Economic Forum and its precursors, the ideological and organizational structures that preceded it and actually led to it. I go into great depth about their Malthusian population control beliefs, … the roots of the environmental movement that they have embraced. And also further into the climate change catastrophist ideology,” he says.

Another way to think about the global elite project to set man against nature, says Rectenwald, is as “the Great Leap Backward.” It’s a recasting of the Great Leap Forward, Mao Zedong’s sinister economic and social experiment in collectivization that according to some estimates killed more than 50 million people.

Ideologically, says Rectenwald, the Great Reset and the Great Leap Forward are very similar. They’re both totalitarian assaults on the human race.