Requiem for a Female Serial Killer – a review 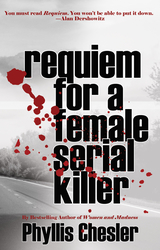 Requiem for a Female Serial Killer, written by Dr. Phyllis Chesler, was published in 2020 by New English Review Press years after her phone conversations, letters, and visits on Death Row with serial killer, Aileen “Lee” Wuornos. Though her interactions occurred over thirty years ago, Chesler remained haunted by her time spent with the high-profile serial killer. She says her motivation to write this book was to memorialize Wuornos’ life, deeds, and death, but, in fact, it also seemed cathartic for her; remembering her work on this case was important to help Chesler better understand the complexities of the interactions between Wuornos, herself and the unwavering criminal justice system. Chesler sees clearly how female serial killers and sex workers are viewed and treated differently within the courtroom. Wuornos never had a chance to be understood outside that stereotyped prism. In addition to laying her time with Wuornos to rest, Chesler sheds light on the horrifying circumstances of Wuornos’ life, and how such events can shape the trajectory of a young girl’s life, such that the catastrophes she endured likely contributed to the murders she perpetrated.

Wuornos killed seven men, all strangers to her. The first one was clearly a sadistic rape that Wuornos killed to survive his brutal attack. Unbeknownst to her, he already had a record. But, once she let loose her rage, it may not have been possible to contain it again. At least three, perhaps four of them were Johns, who sought to buy sex from her; they were found naked or with their pants in disarray. When Wuornos was finally arrested and headed for trial in Ocala, Florida, Chesler was drawn there. She admits the allure of attending the trial was enhanced by the possibility of exposing the life of a prostitute, as Chesler attended as a feminist organizer and potential courtroom witness, and not as a psychological evaluator or journalist. Without any training in forensics, Chesler found her own way into the case by initially making contact with Wuornos herself before her legal team eventually accepted Chesler’s involvement. After spending time with Wuornos, Chesler organized a pro bono team of experts to testify about violence against prostitutes and a prostitute’s right to defend herself in hopes of addressing the level of complex, post- traumatic stress from which Wuornos and all prostitutes suffer. Yet, for a variety of reasons Chesler discussed in the book, these expert witnesses were never called to testify in Wuornos’ case. In fact, with the exception of Wuornos’ testimony, jurors never heard evidence about violence toward prostitutes either generally or perpetrated by Wuornos’ victims.

Chesler sought to profile the ‘monster’[1] that Wuornos was called by the media (Jenkins, 2003),1 a task that took her years to complete. Chesler, a prolific author herself, sought guides for this task. Of all the male and female serial killers she considered, only a handful stuck out as meaningful to her as reminiscent of Wuornos; in particular Ann Jones’ Women Who Kill (2009) and Melton McLaurin’s Celia (McLaurin, 1991). Despite the astounding similarities between Wuornos and FBI-complied lists of male serial killer profiles, as a woman and sex-worker Wuornos did not totally fit their profile. Wuornos was abused in childhood, set fires, had a possible low IQ, had PTSD, was ‘mentally ill,’ had trouble maintaining employment, was a loner, and engaged in petty crimes. Yet, as Chesler came to discover, despite these similarities, Wuornos’ gender and source of income overshadowed all of these other risk factors and prevented her psychological status from being considered in her case. Wuornos refused to see herself as a victim and together with her attorneys rejected the psychological defense that might have saved her life.

Chesler admits she was on a prescient feminist mission. This mission, her background in psychology and feminist theory,[2] her learning about the criminal justice system and its associated sex-based double standards, as well as the jarring reality that women are treated more harshly in the justice system despite the general perception that the system is lenient for women, awarded her a unique perspective when it came to profiling Wuornos. Almost thirty years after initially becoming involved in the case, Chesler returned to her study of Wuornos to write Requiem for a Female Serial Killer. She reviewed her own files consisting of interviews with lawyers and potential expert witnesses, legal transcripts, videos of her trial, and the articles, books, and films about her case. Moreover, she consumed every study and memoir she could find about prostitution, women killers, and about serial killers in an attempt to expand the use of battered woman’s syndrome to prostituted women in court cases and to argue that prostituted women were routinely in extreme danger and had the right to defend themselves. Her retelling the story interspersed with her own emotions as she went through the exercise then and again now is a compelling glimpse into what psychologists will face when working on these cases.

The goal of reprising her expertise on Wuornos was to demonstrate to potential jurors that life of a ‘working girl’ such as Wuornos consisted of enduring a toxic level of contempt and the most extreme kinds of violence. Chesler wanted to open the public’s eyes to the notion that Wuornos may have killed in self-defense, at least the first time. In her attempt to do so, Chesler draws attention to the hundreds of violent rapes and gang- rapes that Wuornos experienced and described in detail to her. It is not a pretty picture. Drawing on her experience as a psychologist Chesler was able understand that these repeated traumatic events could easily have led to the kind of paranoia, terror, and rage that could account for (but not justify) Wuornos’ murder spree. In addition to her goal of educating juries, Chesler sought to expand the use of the battered woman’s defense to include prostitutes through her portrayal of Wuornos.

Reflecting on her time spent with Wuornos, Chesler acknowledges that she may not have involved herself if these crimes took place at present. She recounts her frustration with her interactions with the mercurial temper tantrums Wuornos displayed as she fought for some control over her fate. Chesler had no idea the toll her involvement with Wuornos would take on her emotionally, such that she packed away her files which remained unopened for thirty years. However, in retrospect, the goals she sought to accomplish seem to have been at least partially met. Wuornos is acknowledged in history, prostitutes are being recognized as engaging in survival sex, the gaps in male and female courtroom treatment are slowly being closed, and abuse histories of battered women are more frequently being incorporated into legal matters.

Chesler feels what she has taken from her time with Wuornos, the time since then, and her present book Requiem for a Female Serial Killer is best described by the end of the book,

“If you had been on that jury, would you have voted to put her to death? Or to keep her in isolation for nearly eleven years, where she would inevitably become even crazier than she already was? Or would you have chosen to stash her in a state mental institution on
heavy medication for life?

“Lee is long gone—but she still lives on in my imagination and memory. I titled this book Requiem for a Female Serial Killer because this is my way of finally laying her to rest—by memorializing her life, her deeds, and her death. A dirge of sorts, to mourn what can
happen to a girl in this world, a horrifying and pitiful tale with an inevitably sordid ending.

“. . . Yes, I know she was a raging drunk, a foul-mouthed, obnoxious, unstable, contrarian—and a serial killer as well—and yet, now that I more fully understand what rape and prostitution can do to an adolescent and to a woman, and what a pitifully damaged childwoman
she really was, I have more, not less, compassion for her.

“When I leave this book, I leave off, perhaps forever, continuing to grapple with the issues raised by her case.

1The movie “Monster” was made after Wuornos was put to death detailing much of her life but without the feminist advocacy Chesler wanted to demonstrate.

2Chesler was one of the earliest feminist psychologists with her classic (Chesler, 1972) book, Women and Madness.