More than once I have wished for a modern folk singer who would write about the tragic murders of London workers in the transport bombs of 7th July 2005, or the murders of little girls and their Mums at the concert at the Manchester arena last year, with the passion and anger that they rage against long ago colliery disasters or shipwrecks. There are a few moving songs about recent disasters – Seth Lakeman’s Solomon Browne about the crew of the Penrith Lifeboat is one of the best – but that was an accident. No one was to blame.

Rock and Roll was about rebellion; Punk rock was anger. But anger at Mrs Thatcher was politically not just corrrect, but encouraged, admirable. Punk rock anger at the current oppression is only acceptable if the ‘oppressor’ is identified in a politically correct manner. When it is identified to support someone who is himself railing at the real menace, it is not acceptable. As the Scottish band the Rebellions have discovered. But true to their name they are unapologetic.

From the Daily Record (the left-leaning, Hope not Hate financing, no longer the newspaper of the WWC, Daily Mirror in Scotland) and the Scottish Sun

AN AYRSHIRE band have been axed from the line-up at a popular music festival just hours after releasing a song about former English Defence leader Tommy Robinson. Rockers The Rebellions penned a controversial new tune about the far right activist and hailed him as a “working class hero”. 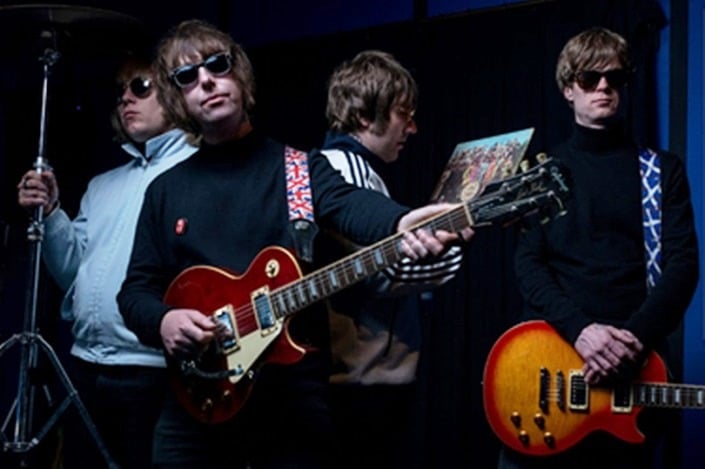 The Rebellions released the track called “Tommy Don’t Stop” on their Facebook page on Thursday.

The post said: “Tommy Robinson. For many including myself he is a working class hero!  For many he is not liked at all. This was one of them songs that just flew out within ten minutes and for any musician when that happens the feeling is great! As a musician free speech MUST be protected! If it’s limited then we are limited! Not all will agree with us doing this song but we need to stay true to ourselves!!”

But the band were dropped from the festival bill today after organisers hit out at “the nature of their latest release”.

Making the announcement on the [email protected] Facebook page, festival chairman Colin Sinclair McDermott said it was with “deep regret” that they had decided to remove the band from the lineup. He said: “The Rebellions are a very talented young local band who have played the festival before and we were delighted to give them the opportunity to open up our main stage on the Saturday night. Sadly, due to the nature of one of their latest release we no longer feel it would be appropriate for them to play the festival.”

“[email protected] fully support freedom of speech however we feel the lyrics and meaning behind this song would be detrimental both to our charity, our sponsors and more importantly to you, our supporters. I’d like to wish the lads all the very best with their future endeavours. We’ll be announcing their replacement later on today.” Are there Billy Bragg tribute acts – that’s all your worth!

Commenting on the decision, the band’s lead vocalist Sydney Rebel, 27, said the group were shocked at having their set dropped. He said: “It’s an absolutely ridiculous decision, and it’s ridiculous that they can put out a comment saying that they support free speech. It’s very important that people don’t axe bands just because they say something that they don’t like, it’s only because of who the song is about and that’s not fair.”

“But we’ve now also been dropped by PrestFest which was meant to take place tomorrow night and it’s just not right. We are not a political band and we never meant to offend anyone, but we stick by what we said and it will never be deleted.”

“Some things just need f*****g saying. Peace and love to those that show it back!”

Last night, a band member – who asked not to be named – told the Scottish Sun the decision to bin them from the main stage was “absolutely shocking”.

“Music is about freedom of expression not matter what the subject is. You are free to sing about whatever you want to sing about. If people don’t like it they don’t have to listen.

“All I did is express how I felt about Tommy in a song. We didn’t mean it to be political. Nobody will have us playing now and it is absolutely terrible for a song.  I didn’t expect the backlash. I wasn’t too surprised by it because I know how much he is hated. But he is hated by people who don’t focus on the main problem.”

He added: “They can’t shut us down for one song. I will not rest on this at all. I will keep on pushing.”

They are getting a lot of support from their fans. And the usual snide comments from the PC crowd :-

“By supporting Tommy Robinson you are also supporting the EDL – a very unpleasant far-right organisation indeed. Far-right groups are generally not know for defending free speech unless its their own. Just saying.”

“And thus your music career is over.. Picked the wrong side genius.”

Yes, they really do understand how they enforce silence and acquiescence by threatening our jobs and livings.

Punk rock never was a money making genre even at it’s height. The money these days is in (c)Rap and the glamour girl manufactured production numbers. But for rock and metal the joy of playing it what it’s all about. there are fewer and fewer pubs these days, and of those hanging on not many host live music anymore. To lose local festivals really is the establishment powers that be exercising their stranglehold on all aspects of our daily life.

Rock on the Rebellions – you for one are living up to your name – all the best from an aged rock hen.