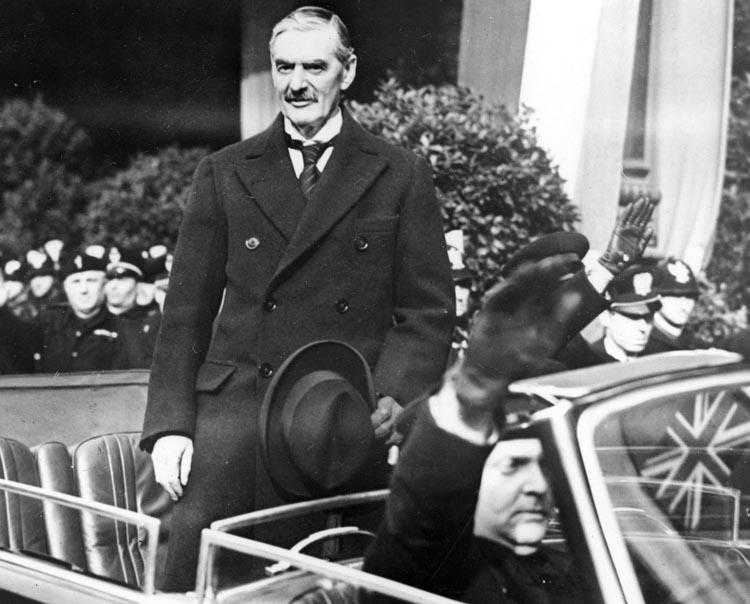 When Germany invaded Poland on September 1st 1939, every schoolboy, in Macaulay’s phrase, knew or was taught a major cause.  It was because of the Munich Agreement of September 1938.  The same schoolboy has not been briefed much of the truth.  The much-maligned Munich was in fact a largely successful exercise in Grosse Politik when Britain bought time at the expense of a smaller nation, Czechoslovakia.  That is what great powers do.  Hitler was furious, deeming that he had been swindled out of his war by Chamberlain.  And then Britain, in the greatest folly of its age, threw away its gains with the Polish guarantee of March 1939.  As A.J.P. Taylor reported, on 30 March: Chamberlain wrote out a guarantee to Poland with his own hand.

Colonel Joseph Beck, the Polish Foreign Minister, accepted the guarantee, as he said: ‘between two flicks of the ash off his cigarette’.

On the outset of war, the wise and beneficial course was simple: do not declare war.  Let us observe from the sidelines the Germans beating up the Poles and making shameless love to the Russians as they did after the Molotov-Ribbentrop pact of August 23, while we hasten our preparations for war but remaining nominally at peace.  This option was closed by Neville Chamberlain, the great peacemaker, who in March 1939 had given Poland the guarantee that any attack on that country would mean the entry on its side of Britain.  Since we had no forces capable of defending Poland that was a singularly vacuous bluff, though the historian Andrew Roberts defends the guarantee by terming it a ‘trip-wire’.  Five months later Hitler invaded Poland and defeated it in three weeks. The trip-wire worked!  It told us what we already knew and prevented us from taking decisive action.  This triumph of statecraft drew Britain into a war that finished it as a great power, bankrupted the State, and led to the end of the Empire.

Today Britain is treading the same path. The Russian invasion of Ukraine (‘unprovoked’) has led to the virtuous leadership by Britain of the anti-Russian cause.  Its champion is Boris Johnson, after whom streets are named in Kiev though not in Britain. He invited Zelensky to address Parliament by Zoom, and himself visited Kiev twice.  He will be gone in weeks, but his Foreign Secretary, Liz Truss, has adopted the same hard line and her coming accession to the premiership does not signal any change of policy.  Her Telegraph headline (29 July) is I AM A FREEDOM FIGHTER WHO WILL WORK RELENTLESSLY TO SECURE VICTORY FOR UKRAINE.  The mantle of ‘freedom fighter’ is taken over by Liz Truss, not a likely disciple of Che Guevara, and nobody can say what ‘victory’ for Ukraine would look like.

Ukraine is now the heir to Poland, with whom it shares a 535 km border and joint border controls.  The rationale for Britain’s involvement with Poland-Ukraine is uncannily similar to the Polish guarantee in March 1939. Britain is now effectively at war with Russia, with no prospect of a victorious outcome for Ukraine, yet Britain pledges such unconditional support as fully equals the Polish guarantee.  Daily the media tell us of gains by the Ukrainian forces, with high-grade weaponry coming in from Britain and the USA.  Our leading generals tell us that Russia has already lost the war.  The same media are less forthcoming on the Russian plans.  It is clear however that Russia has no option but to prevail, and the Black Sea is a war zone, in which any NATO incursion would be unbearably dangerous.  So the Russian blockade of Ukrainian exports continues, with blockade being the deadliest weapon in a state’s armoury (it did for Kaiser Wilhelm and Napoleon).

The counterforce on which Britain relies is NATO.  To call it ramshackle is unkind but realistic, since it is only nominally united.

France has no intention of endangering its historic relationship with Russia, and Germany remembers too well the past.  Of the other NATO members, most look to the US and Britain for serious defence action and would simply like the problems to go away.  Sweden and Finland have applied to join in the hope that the others will do whatever fighting is necessary and at any rate keep them out of the combat zone.  Since the Finland-Russia border is 1,300 km that means a huge new opportunity for trouble-making.  NATO is where Europe was in 1914, when ‘encirclement’ pushed Germany over the edge of decision.  And indeed the ring of hostile states looks to a Russian remarkably like the run-up to August 1914, with everything depending on the timing of the decisive move.  Can we be sure that this sense of timing is safe with President Biden and Liz Truss?

Britain is now the point man for the move into the Continental war zone.  It has happened before, and it did not end well.