“Who Will Be [Killed] Next?” asks the New York Times 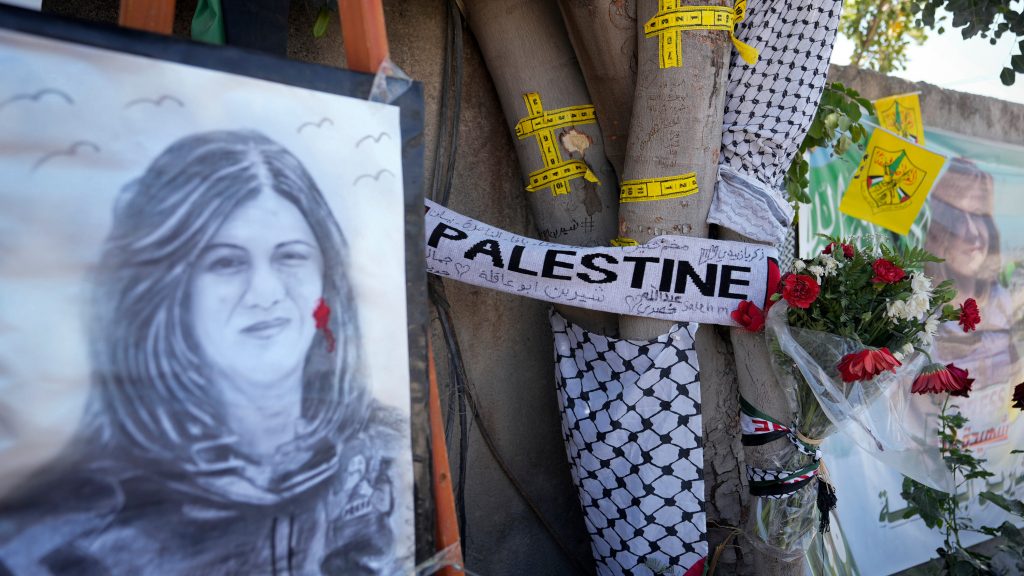 “Readers often assume that reporters write their own headlines. In fact, they rarely do. Most headlines at The Times […] are written by editors experienced in the task.” How do they do it? “Using a startling quotation can be effective, as can singling out a particularly salient number or fact [but] the main things are simply vivid wording, a conversational tone and internal tension, […] Internal tension […] is when two elements of the headline are at odds, creating a mystery that can only be solved by reading further [resulting in] headlines that will reach and draw in as many people as possible.” This is how the New York Times explains its recipe for writing headlines.

So how do you juice up the headline for a PLO’s legal adviser’s “guest essay” intent at squeezing maximum propaganda value out of the death of Al Jazeera’s Shireen Abu Akleh in a shoot-out between Israeli soldiers and Palestinian terrorists during an arrest operation in Jenin? How about “Journalist Shireen Abu Akleh Was Killed in Jenin. Who Will Be Next?”

How does this headline accord with the New York Times’ cookbook for headlines? Is “Who Will Be Next?” a “startling quotation”? It is startling for sure, but it is not a quotation — its not in the “essay.” Does it “single out a particularly salient number or fact”? No it doesn’t. Does it “create a mystery that can only be solved by reading further?” No, there is nothing in the “essay” that answers that question. “Internal tension?” That’s for sure — but it is not the tension between components of the “essay.” The “essay” is a mere attempt at smearing Israel in Abu Akleh’s death. The implication present in “Who Will Be Next?” part of the headline — that the killing was deliberate and that someone else is already in the cross-hairs of the heartless killers is a freebie thrown in by the New York Times’ “editors experienced in the task.”

And the headline is not the only part of this “guest essay” where New York Times editors eagerly lent a helping hand to a Palestinian Israel-hater. One does not need to be particularly perspicacious, for instance, to see a ready alternative to the essay’s claim that “Israeli investigators have asked the Palestinian Authority to hand over the bullet that killed Shireen, claiming that they would not be able to reach a definitive answer without this cooperation. Palestinian officials have refused, and it’s not hard to see why. As Palestinian officials and human rights groups have noted, Israel has a long track record of failing to adequately investigate itself.” The obvious “not hard to see” alternative is omitted, but it is significant: what if the bullet was fired by a Palestinian gunman? The death would stop being a “story” — that is, it would no longer be usable in the noble task of smearing Israelis — a clear loss to the Palestinian Authority. One is reminded of the killing of Muhammad al-Durrah in 2000, shown on TVs worldwide as a proof that Israelis kill innocent children in cold blood, which inspired much Palestinian violence during the second intifada. It ultimately turned out that he was not killed by the Israelis — but that the segment was a disgraceful and dishonest concoction by a French TV journalist angling for sensational footage.

Nor did the New York Times editors bother to check the quotes sprinkling the “essay.” I was particularly intrigued by this one: “An army spokesman even made the chilling claim that Shireen and her colleague were “armed with cameras.”” The “armed with cameras” part was hyperlinked, and I thought I’d check — it lead to a Times of Israel article that contained this paragraph: “Kochav described Abu Akleh as “filming and working for a media outlet amidst armed Palestinians. They’re armed with cameras, if you’ll permit me to say so.”” Clearly, “armed with the cameras” as shilling for “armed Palestinians” makes perfect sense; there is simply nothing “chilling” about that quote — yet the New York Times‘ editors didn’t care to correct this misrepresentation.

New York Times’ editors, by commission and by omission, by writing luridly provocative headlines and by neglecting to verify quotations, help throw mud at Israel. The question is, why? Why not point out the obvious — that Shireen Abu Akleh was killed by Palestinian terrorism, no matter who fired the shot, because if not for terrorism, there would be no Israeli arrest raids? Why not suggest that the way to proceed is for Palestinians to acknowledge the legitimacy of Israel, and to choose to live in peace? Why not point to the obstacles to peace — that Palestinian rank-and-file being fed, clothed, and sheltered by the international community, and their leadership being welcomed and feted in world’s capitals, Palestinians have zero incentive to stop their violent “struggle”? And, speaking of “who’s next” — that is, next Israelis and Palestinians getting killed — why not suggest that Palestinians should end their intransigence — and that the international community should stop coddling them and encouraging them by their lenience?

That would have been informative and constructive, but it is not the New York Times’ way. Instead, the paper shows off its editors’ verbal ingenuity — even though more people will get killed “next” as a result.