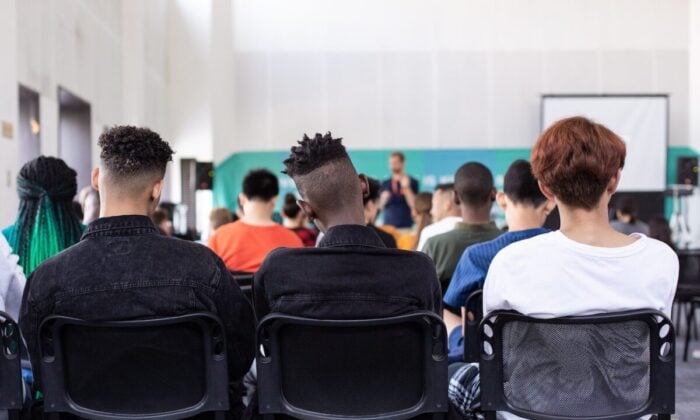 Although academia is sometimes dubbed “the ivory tower,” it is anything but a quaint exception to or ancillary adjunct of the real world. Quite otherwise, academia is an ideological state apparatus. In fact, I maintain that it is the dominant ideological state apparatus. Or, to borrow a more recent formulation, academia is best understood as “the cathedral,” as the contemporary equivalent of the medieval papacy in our “progressive,” postmodern times.

The received notion of academia’s irrelevance is a guise that has allowed the institution to hide its ideological role in plain sight. Yet the cathedral does generate dominant ideologies, although time is required for its products to be disseminated across the broader social body after they have been digested and excreted by the media, the interchange between the cathedral and the unwashed. However, the time lapse has decreased in the digital age, when academics can speak directly to the public on social media, and when their publications are accessible to the layperson in digital formats—although in jargon-laden and often incoherent prose.

It may take time for academia’s ideological work to affect the social body, but the effect is sure to be felt. That’s why a recent article, published in the International Journal of Qualitative Studies in Education, should be a cause for concern. According to the article, titled “‘Dead Honky’—against Technologies of (White) Violence,” academia not only “performs violence” against “whiteness” but also represents an extreme case of academic malfeasance and fraudulence. The article has been making the rounds in conservative media, with implicit outcries over its racist language. With calls for “the death of whiteness” and “to let whiteness bleed out,” the piece contributes to the already incendiary and ludicrous field of critical race theory (CRT).

Had this essay applied its violent rhetoric and imagery to any other racial or ethnic category, its barely concealed homicidal ideation would have had its author, D.-L. Stewart, dubbed a “Nazi” and relegated to a figurative gulag in academic Siberia. Instead, the article will, no doubt, be cited favorably in future “scholarship,” by some equally or even more unhinged academic fraudsters.

Others have written at great length about the racist implications of such CRT texts and their corrosive effects on race relations. I will point instead to the intellectual damage it does the academy and society at large.

“Whiteness,” Stewart declares, “is itself violence.” As evidence that whiteness is violence, Stewart simply appends a footnote to the claim. The footnote baldly asserts: “Over the last 2 years, I have seen this said with a specificity and clarity by Black people on Twitter in a way I have not so readily seen in academia.” That is, the evidence that whiteness is violence can be found in unspecified tweets by unspecified black people who say so. But Stewart’s article is rife with citations to previous books and articles that also make the assertion without evidence or reasoning. Such self-referentiality has become the hallmark of academic discourse in the humanities and social sciences, and especially in CRT.

Other CRT “scholars,” Stewart also notes, have suggested that the term “whiteness” should not be used in lieu of “white people” because such usage “may deflect assigning operative agency and responsibility to white people for their white supremacist beliefs, attitudes, and behaviors.” But the author will stick with “whiteness,” because “I cannot swap out whiteness for white people and elide the ways that whiteness remains in power even when no white people are in leadership. This distinction is critically important to avoid the trap that only people racially categorized as white can operate the social mechanisms of whiteness … it is both dangerous and foolhardy to anthropomorphize whiteness as though it were capable of containment solely within corporeal forms at all, let alone within certain corporeal forms.”

Whiteness, that is, is the new ghost in the machine, and it even escapes corporal bodies. Even when no “white people” are in power, or even without people acting at all, this ghost still operates “the social mechanisms of whiteness,” apparently of its own accord. At this rate, the only means for bringing about “the death of whiteness” might be to perform an exorcism on the social mechanisms of whiteness, whatever they might be. CRT is what happens when methodological individualism is abandoned and replaced by “systems” and “structures” that apparently do everything while actual people do nothing.

“TwV [the technologies of white violence] can be performed by anyone regardless of their racial classification. It is not about white racial identity, even though white racial identity was made the proxy for systematized white supremacy. It is a shell game—the more one looks at white people, the less likely one is to see the gears of the machinery and therefore think, for example, that having more BIPOC [black, indigenous, and people of color] elected officials will stem the violence.”

We may guess that Stewart means that the more one searches white people for racism, the less likely one is to find it and the more likely one is to make the mistake of believing that removing white people from power will end racism. Racism is an utterly ineffable and elusive something that forever pervades everything, even when no racists can be located and even when the whiteness that operates it cannot be defined.

In case the reader has been wondering just what the “technologies of white violence” might be, I note that the author defines them as “structures of dominance.” These structures are “the doing-ness of material realities such as race, racism, and whiteness” (emphasis mine). Explaining this definition, the author cites “scholars” who have paraphrased the original definition of technology given by the postmodern theorist Michel Foucault: “any assemblage of knowledge, practices, techniques, and discourses used by human beings on others or on themselves to achieve particular ends.”

According to this definition, everything that humans do is a “technology.” Stewart, however, prefers a more “denotative” definition of technology, which he draws from the Oxford English Dictionary: “machinery and equipment developed from the application of scientific knowledge.” That hardly characterizes what he refers to with the term “technology.” He follows this definition with a tortured statement about the technologies of white violence: “The iterations of TwV are developed from an application of whiteness and the knowledge of its purpose as held by those who espouse white supremacy.” As in all CRT texts, we are in the throes of endless tautologies, given definitions that include the words being defined. Whiteness is what operates the technologies of white violence. The technologies of white violence are applications of whiteness wielded by those who espouse white supremacy. Got it? Good. You’re well on your way to becoming a critical race theorist.

The rest of the essay consists of hyperbolic whining about so-called white violence. “Malicious white terror,” “rhetorical white innocence,” and “pacifying white concessions” are examples of TwV, none of which involve any acts of violence at all. They consist of verbal infractions undertaken by those wielding these “technologies.” The mother of all grievance studies, CRT is obsessed with microaggressions such as TwV and other perceived or imagined slights.

Stewart’s article is remarkable for its nonsensical word salad and ridiculous pretensions to erudition. CRT “scholars” like Stewart reuse plug-and-play phrases and reconfigure them to imitate what they imagine to be sophisticated writing. I’ll refrain from citing further examples, because the foregoing should be sufficient to demonstrate my point. Suffice it to say that the text is a parody of itself and of academic discourse more generally. CRT makes fools of those who engage in it and discredits whatever legitimate scholarship still goes on in academia today. That academic institutions foster such tripe is evidence of the depths to which academia has fallen.

Such muddied and muddled thinking can only have deleterious consequences when it reaches a critical mass. The circular argumentation and evidence-free “qualitative” claims drawn from “stories” or other “narratives” exacerbate our epistemic crisis and further thicken the postmodern miasma in which we find ourselves today. Whatever CRT’s effects on race relations—and they are decidedly negative—the theory should be dismissed on academic and scholarly grounds alone. It’s well past time that the halls of academe were emptied of such rhetorical rubbish.

PrevWould the Indictment of Donald Trump Lead to Civil War?
A Comedy of TerrorsNext