I have Urban Scoop’s Live stream of The Rape of Britain Episode II here. I’m doing it as a link, rather than embedding a Your Tube video because I fully expect any You Tube uploads to be removed within 24 hours. 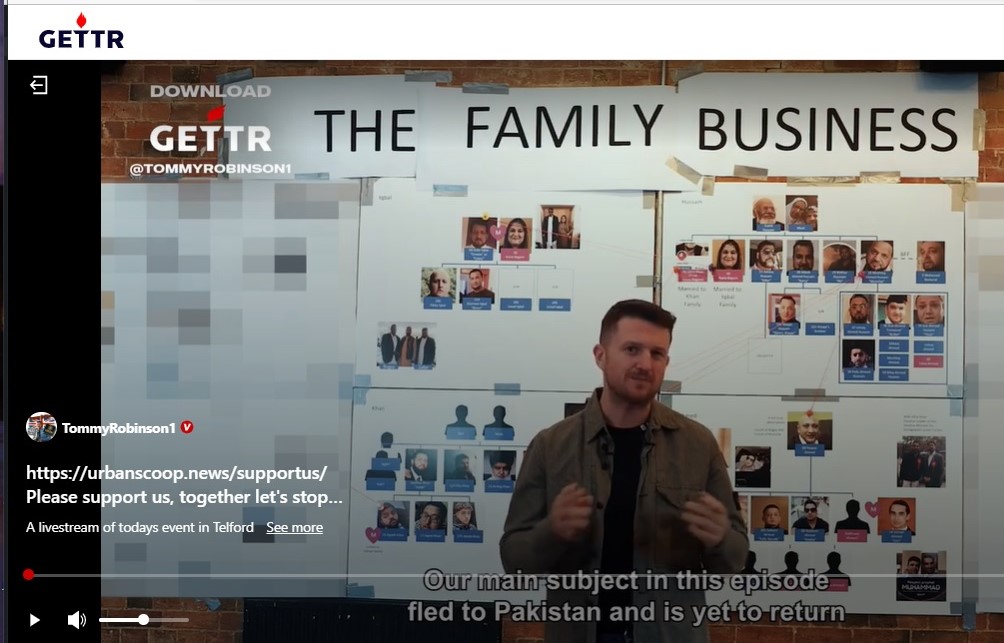 The Shropshire Star newspaper reports the release even in Telford yesterday thus:

Tommy Robinson and his supporters marched through Telford in a demonstration this afternoon.

Around 400 people were in attendance at the far-right activist’s second public gathering in the town this year.

A heavy police presence was in place as supporters of Mr Robinson arrived at Telford Central rail station from around noon, with several more arriving later.

They gathered at the Beefeater pub on Euston Way near to the station before marching over the A442 and through the town centre.

Police triggered the Public Order Act in advance of the event, and there was a huge police presence during the demonstration.

Afterwards the local policing commander for Telford, Superintendent Jamie Dunn, said: “Today’s event caused understandable concern within our communities, particularly as it is the second of this nature in Telford. . .  event has now concluded without any significant incidents of disorder and no arrests.

The event has once again put the spotlight on child sexual exploitation and our child exploitation teams will continue to actively seek out perpetrators and prevent further offending. I would encourage anyone who has been a victim to come forward, regardless of when the exploitation took place. We will listen to them and ensure they have necessary support.”

In nearby Southwater Square, hundreds were in attendance at a counter demonstration. The groups Stand Up To Racism and Shropshire Trades Union Council were among those who met in the town centre at around 1pm. Placards and banners were held up saying ‘No To Racism’ and ‘Smash Fascism and Racism’, while leaflets were handed out urging people to ‘oppose fascist Tommy Robinson’.

The film is about 90 minutes long. It has subtitles for those who need them. The girls give their evidence on camera which is heart-breaking.

Witness statement porn is a real phenomenon; where child abusers and paedophiles, given a chance (and efforts are made to reduce the opportunity) have been known to trade their statements, and the statements of witnesses amongst themselves. Sometimes they were boasting. Sometimes they got pleasure out of reading a child describe terror or pain inflicted by another abuser. While access to pornography in prison was forbidden for obvious reasons, access to the legal papers pertaining to their case was not. But action had to be taken to my knowledge to restrict the trafficking of such documents. But I admit my direct knowledge of this is some years old and it may be different now.  But notwithstanding those individuals that get pleasure from hearing of a child’s pain there is a point that the public need to be aware of just what horrors have been inflected on our girls, in the hope that knowledge of the wickedness will encourage them to join the campaign. This is what is missed when reporting restrictions on court cases only permit the information that the trial has begun (and not always that) and then weeks later the verdict, the general  offence of which convicted and the sentence (usually). Reporting restrictions are sometimes essential but it is hard to escape a suspicion that in some Muslim rape gang cases the legislation is used to prevent public anger, not to protect the integrity of the trial.

From 30.00 there are clips of Maajid Nawaz when he was still in favour at LBC (London Broadcasting Company) explaining (and give him his due he speaks with disapproval and horror) to his talkshow colleagues how the Koran and Islamic law has no concept of a lower age for marriage or sexual consent. In between him and some other reasoned sensible pundits is footage (36 min) of Speakers Corner firebrands and Da’wa merchants Mohamed Hijab and Ali Dawa explaining the same thing to their followers in more approving and encouraging terms.

At 48 minutes T0mmy himself explains the concepts of the war between Dar al-Islam and Dar al Harb (that’s us) and how, to some Muslims,  this justifies the taking of sex slaves from the lands with which Islam is at war and engaged in the conquest of. This would justify the rape gangs in the UK and much of Europe.

In the last section T0mmy goes to the town of Wem, a small attractive market town just outside Shrewsbury (County town of Shropshire) where there are two ‘Indian’ restaurants  where girls claim to have been raped by men working. Many restaurants serving Asian food in the UK are run not by Indians, but by people who originate from Pakistan or Bangladesh.  ‘Indian’ sounds nicer and will be better received.  T0mmy enters the establishments to give the men accused a chance to answer. One of the restaurants is a separate establishment to the English pub outside, but is contracted to provide their catering. T0mmy’s exchange with the belligerent and inebriated Irish landlord is unbelievable.

It’s a lot to watch, but worthwhile.